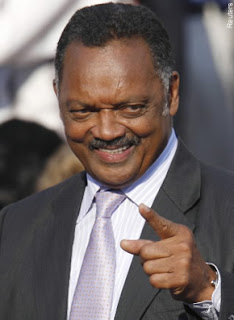 World Policy Forum in Evian, France, the New York Post publishes Amir Taheri’s talk with Jesse Jackson. This is what awaits the US once Obama the ‘Prince of Peace’ is crowned commander and chief.

Oh, and by the way, the US communist party is feeling rather optomistic as well. Its regional party chairman, Libero Della Piana, states that: “We are very excited, we feel that we are at a turning point,” […] “We hope to be part of the discussion. I can see a role for the Communist Party in this next period.”

But now, off to Jesse J. and his hope for ‘The One’ to rid US foreign policy from what the Left deems as, the ‘dangerous influence of a certain minority’. FYI, Jesse is pointing to NYC.

Amir Taheri: PREPARE for a new America: That’s the message that the Rev. Jesse Jackson conveyed to participants in the first World Policy Forum, held at this French lakeside resort last week. He promised “fundamental changes” in US foreign policy – saying America must “heal wounds” it has caused to other nations, revive its alliances and apologize for the “arrogance of the Bush administration.”

The most important change would occur in the Middle East, where “decades of putting Israel’s interests first” would end. Jackson believes that, although “Zionists who have controlled American policy for decades” remain strong, they’ll lose a great deal of their clout when Barack Obama enters the White House. “Obama is about change,” Jackson told me in a wide-ranging conversation. “And the change that Obama promises is not limited to what we do in America itself. It is a change of the way America looks at the world and its place in it.”

Eh,… right. The change JJ is talking about, of course means that socialism and Jew hatred is going to be given a major shot in the arm in a Barack Obama administration, and to ensure that prospect, O’s minions are busy filling out bogus regristration cards by the thousands. KGS