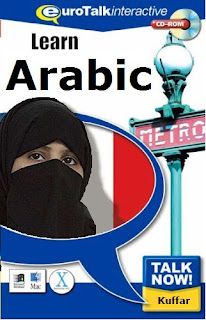 And the critics call Eurabia a conspiracy theory.

First from the Brussels Journal:

“The French government is strongly advocating the teaching of Arabic language and civilization in French schools. Not surprising, considering the number of Arabs and Muslims in France, and the unctuous deference with which they are treated by officials, beginning notably with Nicolas Sarkozy, who cannot praise enough the splendor of Arabic contributions to the world.

The French National Assembly was the scene of a meeting earlier this month of the first Conference on the Teaching of Arabic Language and Culture, attended by a variety of interested parties. There was much wearisome blather about the need for “dialogue.”

In his message to the participants, French President Nicolas Sarkozy called Arabic the “language of the future, of science and of modernity,” and expressed the hope that “more French people share in the language that expresses great civilizational and spiritual values.”

“We must invest in the Arabic language (because) to teach it symbolizes a moment of exchange, of openness and of tolerance, (and it) brings with it one of the oldest and most prestigious civilizations of the world. It is in France that we have the greatest number of persons of Arabic and Muslim origin. Islam is the second religion of France,” Sarkozy reminded his listeners.

Good grief. This is the same load of crap the visiting OIC chief was spreading when he came to town last week. The Mediterrenean Union is being forged right before our very eyes, as the people of Europe get prepared to kiss their culture and identity goodbye. Sarkozy is a traitor to Europe.

The Gates of Vienna has more.

Fjordman: “After the implementation of the Lisbon Treaty/European Constitution, the people no longer have a say and can safely be ignored. They have held us in contempt for years and no longer care to hide this. We are sheep and constitute no threat while they must continue appeasing the Muslims.

Open plans for a “ Mediterranean Union “ or “Union for the Mediterranean,” which will include all EU member states, Mauritania, Morocco, Algeria, Tunisia, Libya, Egypt, Jordan, the Palestinian Authority, Lebanon, Syria and Turkey, was launched in mid-2008, under some concern among Arabs that such a Union might normalize their relationship with Israel. This came with plans for the creation of a “north-south co-presidency” and a permanent secretariat as well as the definition of a ‘‘short-list’’ of priority projects for the region. The European Commission proposes the creation of a co-presidency between the EU and a Mediterranean (read: Muslim) country, chosen with consensus for a two-year term. Brussels is drawing the institutional profile of what will be called “Barcelona Process — A Union for the Mediterranean.”

Notice how they tie this explicitly to the Eurabian Barcelona Process described by Bat Ye’or. Despite this, even after the Mediterranean Union was launched, I heard claims that any talk about Eurabia was a “dangerous Islamophobic conspiracy theory.”

In a letter appearing in the respected Italian newspaper Corriere della Sera, former Italian President Francesco Cossiga in 2008 revealed that the government of Italy in the 1970s agreed to allow Arab terrorist groups freedom of movement in the country in exchange for immunity from attacks. The government of the late Prime Minister Aldo Moro reached a “secret non-belligerence pact between the Italian state and Palestinian resistance organizations, including terrorist groups.” According to the former president, it was Moro himself who designed the terms of the agreement with the foreign Arab terrorists.

Read the rest at the Brussels Journal.

Wake up people before it’s too late! KGS