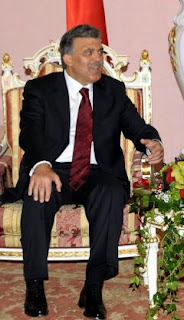 Turkey’s Islamist president, Abdullah Gül is coming to town. Finland’s former president, Martti Ahtisaari, is holding a lecture in the Finnish central city of Jyväskylä, and the Turkish president has been invited to attend.

The Keskisuomalainen, Central Finland’s largest newpaper has made an interview with Abdullah Gül, which can be viewed here, but beware, it’s a Google translation from the original Finnish, but I believe that it can be understood somewhat well. The actual Finnish interview is here.

The questions could have been more hard hitting, especially concerning the role Islam plays within the current AKP led government. Though the two journalists attempted to address the current fight between the secularists and the Islamists, it falls way short of what should have been asked.

Take for example the one question that recognizes the present day battle between the two sides.

3. According to the Constitution, Turkey is a a secular state. But in Turkey there appears to be an ongoing infighting between secular and the religious / Islamic forces. What are the main parties and what is the situation at the moment? There now seems to be something of a “ceasefire”, but how long will it last?”

Abdullah Gül: “We believe that the freedom of expression is important. All the issues are discussed openly in Turkey, and so it should be in a country where people are free. We have a really healthy debate on numerous political issues. Framing these political issues of the debate as a “power struggle” would be incorrect and even misleading.

According to constitution Turkey is a democratic, secular and social state based on the rule of law. Regardless of some fringe elements, it would be fair to say that these principles in Turkey have a very broad and strong consensus. Anywhere in a pluralistic country there is a debate on the implementation of leading principles and other related matters. This is what is happening in our country at the moment. But the principles themselves are strong. I think that would be the really time to worry if no issues were being debated in a democratic Turkey. And these days are far from behind us.”

Feel the sleazy taqiyya dripping from the words of this guy, it’s a masterful play on the actual reality taking place in Turkey. Supposed discussion goes on, all the while the Islamists move the goal posts closer to their side. Pork butcher shops are closing down at an amazing pace due to the fact that state licensing for pig farms are being restricted. The Islamist government is clamping down on alcohol sales in all the major cities which has enraged the secularists even more.

This is just one small example of the blue smoke and mirrors campaign being waged by Ankara, and Western journalists make it so easy for then by giving easy to handle questions submitted way in advance, and allowed to answer without any follow up questions.
Abdullah Gül’s fellow countryman, Organization of the Islamic Conference (OIC), Prof.Dr. Ekmeleddin İhsanoğlu, is also coming to town this Tuesday. Hopefully he won’t be treated in the same like fashion. There is always hope, right? KGS