Radical cleric’s daughter ditches parents’ extremism, chooses pole dancing instead. Yasmine Bakri: “I don’t agree with his views – I just get on with my life and that’s it…” 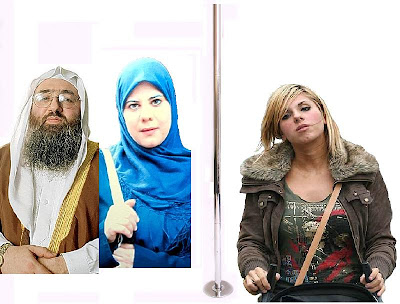 “The HATE preacher Omar Bakri Mohammed paid for a boob job which launched his daughter’s pole dancing career, it was revealed last night.”

“He forked out £4,000 in CASH for 27-year-old Yasmin Fostock’s bust-boosting surgery — while living on BENEFITS in the UK. “

So after getting the boob job, it has been reported that Yasmine has taken to pole dancing to suppliment her own meager benifits she receives from the state. But Omar Bakri, the radical, terrorism loving cleric -who is now exiled to Lebanon- is not having it:

“Bakri dismissed the news as a ‘ fabrication’ and described it as an attack on him and Islam. ‘The more you put pressure on me, the stronger I become. Islam will conquer Britain” ”I have not seen my daughter for nine years, but because she is a member of my family people want to make things up about her. “You are going to pay a heavy price. You can read it any way you like. The time is now.”

Mail Online: “Bakri, who said the British people brought the 7/7 outrages on themselves and praised the ‘ magnificent’ September 11 hijackers, raised his six children on benefits totalling £300,000, and his daughter is following suit. She lives with her three-year-old son in a ground-floor flat in Catford, South East London. Her rent and council tax are paid by the state and she receives child benefit and income support.

She grew up a devout Muslim and in her teens wore a veil. She left school in Enfield at 16 after her parents arranged a marriage to a Turk but the couple separated. She told The Sun: ‘I’ve done pole dancing, but I like to keep it quiet. ‘I don’t normally do topless work, but I’m willing to go topless if the venue is right.’