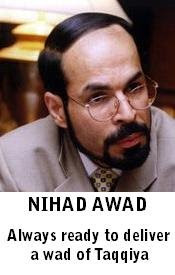 A couple of nights ago, the Grand Hyatt Hotel in New York was the scene of patriotic protestors demonstrating outside in the street against Iran’s leader, Mahmoud Ahmadinejad, and against the people who planned, as well as against those who attended, the Iftar dinner in his honor.

Those who chose to rub elbows with the Iranian promoter of genocide of the Jewish state, are in the opinion of the Tundra Tabloids, the lowest of the low, the worst of the worst, which included representatives of various Christian pacifist groups, a Jewish rabbi and a radical Muslim cleric. Shame on them all.

But what is also noteworthy, is the inclusion on the list of speakers invited to address the crowd of Ahamdinejad well wishers, was none other than Nihad Awad, a founder and former leader of CAIR, the Council on American-Islamic Relations (CAIR).

CAIR’s main goals are to provide the Islamist movement (Muslim Brotherhood) in the US with a cloak of respectability, by first passing itself off as (a) “a human rights organization” while it (b) seeks to undermine American society by advancing its Islamist agenda through the intimidating use of lawsuits, as well as (c) keeping the US off guard at the home front by rejecting any or all political initiatives that seek to limit or curtail Islamist extremism domestically.
The ruse of “Islamophobia” is the best weapon they can come up with, because it automatically creates a “knee jerk” reaction with most Americans -who are already one of the most tolerant people in the world- to (a) not support policies that appear to be descriminating against a certain religious group and (b) distance themselves from people who are warning about the dangers of Islam and mass Muslim immigration. That is their (CAIR’S) modus operandi in a nut shell.
Willing “useful stooges”.
The Tundra Tabloids equally condemns the Christian groups (like the WCC) and the Jewish rabbi that attended the dinner for Ahmadinejad, as well as the legions on the Left and the very marginalized few on the Right, who continually downplay the threat Iran poses to the Jewish state of Israel. It’s time for these people to wake up before it’s too late. KGS
NOTE: Special thanks to Baron Bodissey for the heads up about his post on the same event, as well as supplying info about the Stop Ahamdinejad website.