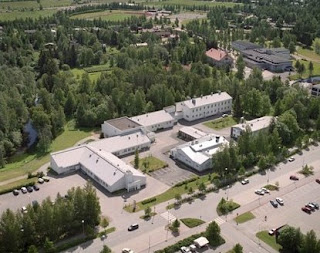 UPDATE1: MTV 3 reports in live report that the killer’s name has been verified as 21 year old, Matti Juhani Saari. The shooter was just yesterday questioned by the police for his You Tube video’s of himself shooting a gun, he was later released. His gun was not taken away.

UPDATE2: Video of killer click here.
UPDATE3: copycat killer just died from his own inflicted wounds. Click here for Google translation of the report.
UPDATE4: YLE now reports that 1o have died + the lone homicidal killer.
This is a real tragedy, a real blow, it feels like a fist hit to the stomach, everyone is in shock. No not again! But yes, it has happened, and you can bet your last Euro that the call for banning guns is going to get real loud here. The Tundra Tabloids can’t deliver any kind of analysis, because nothingat this point is clear , just the basic facts of who, what where and how have been answered, it’s going to take a bit longer to get to the reasons why. KGS
It’s a copycat of the YOUTUBE mass murderer at the Jokela High School from a year ago, in which a crazed gunman killed eight students.
“Police confirm that nine students are dead and two students are wounded after a student opened fire at the Kauhajoki School of (edit: home economics, vocational school)Hospitality. All students have been evacuated from the school and a fire in the building is being extinguished. Hospital sources say the shooter has been taken into hospital care after shooting himself.

One injured victim is being treated in Seinäjoki.

The shooter, a student at the school, turned the gun on himself and is in seriously condition at Tampere University Hospital. According to Interior Minister Anne Holmlund, the suspected perpetrator posted several videos in recent weeks on YouTube showing himself firing a pistol, which he bought last month. He was questioned by police concerning the videos on Monday, but no further steps were deemed necessary.

The tabloid newspaper Iltalehti says that police believe there may be a bomb in the building.Shooting Began at 11.00

The school principal Tapio Varmola says the shooter opened fire on a group of students that were taking a test in class around 11 a.m. The shooter may also have been carrying explosives. Some 150 students were on schoool premises at the time of the shooting. 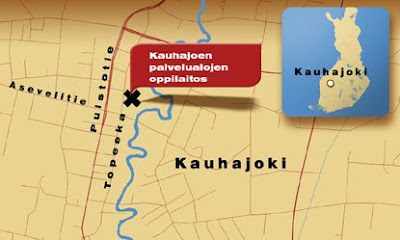 The shooter is believed to be a 22-year-old student of the vocational school.Jukka Forsberg, a maintenance worker at the school, told YLE that several people have sustained injuries. According to Forsber, a man with a ski mask went into the building with a large bag. Soon after, the worker heard shots fired.

Student witnesses say the shooter was seen moving around the school with a handgun. Shooter Warning on You Tube?

Several videos have been discovered on You Tube in which a young man who says his home town is Kauhajoki is pictured shooting pistols at a shooting range. The approximately one-and-a half minute videos were added to You Tube five days ago.

The case so far eerily resembles a school shooting which occurred last November, in which a troubled 18-year-old student opened fire and killed eight people at his high school before killing himself in the town of Jokela in southern Finland.The Kauhajoki School of Hospitality is one of eleven campuses of the Seinäjoki Vocational Education Centre. More here. KGS

UPDATE: CNN has more on the shooting incident:

The shooter then tried to kill himself but was not successful, Antti Rantakokko, the mayor of Kauhajoki where the shooting occurred, reported. Several other people were wounded in the attack, but officials could not immediately say how many.

“We can’t tell you exactly how many people are in bad condition,” the mayor said. “We don’t have the numbers yet.”

The shots were reported at a college for home- and institutional-economics in the municipality of Kauhajoki, according to YLE, a Finnish national broadcaster. Watch more about the shooting »
A 22-year-old student of the school walked into a classroom full of students who were taking a test, and opened fire about 11 a.m., YLE said. Jukka Forsberg, a maintenance worker at the school, said the man was wearing a ski mask and walked into the building with a large bag, the agency said. About 150 students were on campus at the time.

The man later shot himself in the head, but survived, Mikka Pettersson of the Finnish News Agency (STT) told CNN. Smoke billowed from a building on campus but officials could not immediately say what caused the fire. Three hours after the shooting, firefighters were still trying to bring a blaze under control, fire official Olle Peauttonen told CNN.

Tapio Varmola, a staff member at the school, told CNN he was in a building about two blocks away when the shootings occurred.

“I did not hear anything,” he said. “We did not know what happened. It became clear later.”
After the shootings, he said, he heard students shouting. Police came about 10 minutes after they were called, Varmola said. “It took two hours to get this situation ended,” he said.

The school taught late teens and young adults, Jarkko Sipila of MTV 3 told CNN. “It’s more or less like an agricultural or professional school where people teach how to make food or how to cook in big kitchen, in industrial kitchens,” he said. Meanwhile, speculation surrounded a video on Web site YouTube, which appeared to show a man from the town of Kauhajoki firing a pistol at a shooting range. It was eventually withdrawn from the site.

Kauhajoki, with a population of about 15,000, is about 290km (180 miles) from the capital, Helsinki. The incident comes almost a year after another school shooting left nine people, including the gunman, dead in the Finnish town of Tuusala. Before that shooting, the gunman, 18-year-old student Pekka-Eric Auvinen, posted a video on YouTube titled “Jokela High School Massacre 11/7/2007” — identifying the date and location of the attack.

“All these memories are being brought back and people are asking the question, ‘Why again’?” Sipila said. Finland enjoys a strong tradition of hunting and has a high proportion of gun ownership, with 2 million firearms owned in a nation of 5 million.