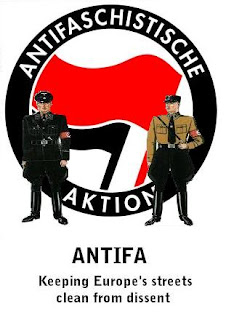 Pamela at Atlas Shrugs posts a note from a Jew who participated at the Anti-Islamization rally in Cologne Germany. The guy was beaten up by the black shirts who commandered the streets from the city of Cologne. KGS

Pamela: I am waiting on the first person account from one of the Jews beaten at the anti-Islam rally. He wrote me this note in the interim unsolicited. It broke my heart:

“Give me one day more, I have a broken rib and will need to go to hospital in Paris this morning as I have only just arrived from Germany. After which I will send over an article of the events of Friday and Saturday.

I just want to tell you that I very much appreciate what you do over there in America. It has made such an impact and I think that it contributes to the overall moral fiber in America that we in Europe are so without. I am jealous of your environment. The fact that you can still do battle with words is the distant past for us. Here Jews and ethnic Europeans are locked in a violent struggle. Please take heed of this. It pains me to admit that Jews here are forced to such vulgar actions as forming “gangs” in order to survive and protect ourselves from you know who.

Fighting has become a way of life for us here now. Isn’t it strange how just sixty years later, Jews are once again fighting for survival in Europe? Only this time we aren’t going quietly. And this time we are standing together with our ethnic European brothers who still care about what is right. I will tell you this Pamela, our men are strong and our women even stronger. We will see this thing through.

I will move to Israel when it suits me, I WILL NOT RUN TO ISRAEL. Anyway I will shut up now and let you get back to work. Look out for my report in 24 hours.”