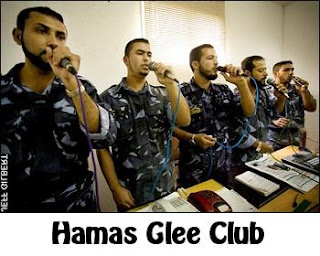 Doctor of medicine, and scholar of Islamic jihadism, and Islamic anti-Semitism, Dr.Andrew Bostom, posts the following jihadi “sing along” …from Pakistan.

The pic is of Jihadi Hamas Boys a-singing.

Perhaps Finland’s famous home boy hater of music, Abdullah Risto Tammi, is in tears over this one.

“MEMRI reports on an August 14, 2008 Lahore, Pakistan conference celebrating Pakistan’s Independence Day. To open the conference by the jihadist group Jamatud Dawa—the new name of Lashkar-e-Taiba–attendees were led in a rendition of the following song by a duo of Professor Hafiz Muhammad Saeed (the group’s leader) and Hafiz Abdur Rauf, which the organizers described as the “jihadi tarana (anthem).” And this anthem is fully consistent with orthodox Islamic theology/ jurisprudence on jihad.”

It has forced oppressor’s head to bow; it will end oppression and torture.
(Is se zalim ka sar jhuka haiIs se zulm-o-sitam mitega)

Jihad is the order of Allah; jihad is the path of the Prophet.
(Jihad farman hai Khuda kaJihad rasta hai Mustafa ka)

This is the Will [of God], this is [His] happiness; no one can change it.
(Yahi masheeat, yahi raza haiJise na koi badal saekga)

If jihad has the power in it; mischief will have no substance.
(Rahega dam kham jihad mein toFasad mein dam naheen rahega)

Enemies of Jihad will be dishonoured; they will sink into an unending abyss.
(Jihad dushman zaleel hokerAthaah pasti mein ja girega)

Jihad is the protection of the Ummah; jihad is the symbol of self-respect.
(Jihad millat ki pasbaniJihad ghairat ki hai nishani)

Jihad is a Revealed gift; only the lucky ones will get it.
(Jihad tuhfa hai aasmaniNaseeb walon ko hi milega)

Jihad teaches how to live; only those will live who learn to die.
(Jihad jeena sikhane walaaJo marna seekhega wo jiyegaa)

Jihad is the state of ecstasy; jihad is the army of the brave.
(Jihad alam hai bekhudi kaJihad Lashkar bahaduri ka)

Jihad is the flag of truth; Never has it bowed, nor will it bow.
(Jihad parcham hai rasti kaKabhi jhuka, na kabhi jhukega)

Jihad is the destruction of heretics; those who fight against it will die.
(Jihad alhad ki tabahiIse mitayega jo mitega)

Jihad is to stand for truth; not go back once you have taken the step.
(Jihad Afazan haq per hai datnaQadam barhaker ne peechhe hanta)

Ah.. the Pakistanis…. perhaps they didn’t know that “jihad” really means a “peaceful personal struggle of the spiritual inner self”. Heh, once again, the third world Muslim masses get it all wrong. KGS