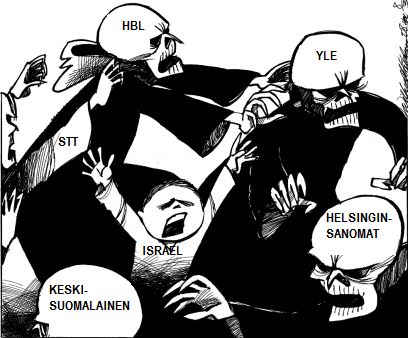 The Tundra Tabloids has grappled with the issue of a biased news media on more than one occasion, and by default, (the way the news media operates) it’s only logical that frequent postings on the subject is inevitable.

Barry Rubin, from the Gloria Center, pens another thought provoking essay that gets to the point, or should I say, “to the heart of the matter”, concerning the ever increasing reliance by the local news media, on the international news wire services . It’s a train wreck in slow motion.

Rubin writes: “In the olden days, when night watchmen patrolled the streets of towns, they had a standard chant: “Ten o’clock and all is well!” Sleep soundly; nothing’s wrong. Each week, when I start to write this column I hope to be able to do the equivalent. I could just write one sentence: “This week, the stories are fairly and accurately reported so there’s nothing to write about.” Unfortunately, for your reading time, my workload, and the state of the world, each week there is indeed something to write about. Alas, such is true this week. Increasingly, print media coverage comes from Associated Press and Reuters as newspapers close down costly foreign bureaus. This should be good news since these two wire services are supposed to be fair, objective, and balanced–even bland–in their presentation of events. At times in the past they have been biased against Israel, though not all the time by any means and also aware that it was not right to slant their coverage slow. Like Adam and Eve, driven from the Garden of Eden, they knew their nakedness and were ashamed. Nowadays, however, both shame and restraint are gone. Many articles–again not all–are extraordinarily biased. For this to happen requires several things: -The reporters know they will not be punished for doing so, either by verbal criticism, a slowing of their career rise, or firing. -Editors know the same.
-High-ranking executives do not fear the complaints of their media subscribers. -And all have redefined the purpose of journalism from fairness and accuracy to political advocacy. Of course, they will say that this is all nonsense and they do a very good job, thank you very much. The problem, however, is that it is so ridiculously easy to show this isn’t true that it is hard to believe that the evidence will not persuade at least those outside these organizations that the case is proven.

That’s why the Tundra Tabloids adds an (al-) to the names of these news wire services, for their being so overtly biased. It has earned them the distinction of no longer being understood as news gathering services, but as organizations that disseminate Arab propaganda. You know what I mean, they’re correcting the believed “wrongs in the world” through the use of their pen, or should I say, computer.

The Finnish news media is no different in that respect, from other countries where its foreign news reporting is concerned. The Finnish media is heavily indebted to the nonsense and drivel coming from these very same “al-” wire services. For an example, the Keskisuomalainen, a major newspaper in Central Finland, terminated last year, the services of Semy Kahan, a Finn reporting from Israel, opting rather for the biased reporting of the (al-)IPS, whose motto could be: “Journalism without the war cry“.

Semy Kahan, is and has been, one of the better and more trusted of Finnish journalists reporting from Israel, on all things related to Israel and the conflict, due to his fair minded approach to the both sides in the conflict. The TT has disagreed with Kahan on numerous occasions, but also realizes journalistic fair play when it sees it, …in spite of the differences of opinion. The Keskisuomalainen is just one more news organization that is “out sourcing” its foreign news reporting to outside agencies. Too bad.

I believe that the recent words of retiring Director of Communications for Finland’s VR (state train passenger service), Martti Mäkinen, sums up the mindset of the Finnish media (and by extension elsewhere) rather eloquently in an article published in the Finnish online magazine Telma. In writing about his profession on the eve of his retirement, Martti Mäkinen writes:

“Journalism is the world’s wisest profession. Opinions come with the snap of the fingers, and they are always right. Lacking basic knowledge and spewing prose laced with a strong biased attitude, the reader complains in vain. Any newcomer catches the disease quickly. It was a wonderful time! One source for a journalist is a press secretary. Individual differences in that profession are great, but putting the firm first is the corner stone of the profession. The same can be said of journalists, for no one dares to bite the hand that feeds it. It’s something left unsaid.”

How true, and it takes a person retiring from the profession to openly state what most journalists know all too well. The TT has written extensively about the journalist profession, and it always behooves me to think that there are actually journalists out there, who truly believe that journalism is somehow immune from the same kind of lust for power that plagues the rest of humanity, who either are striving for or against it, or have just learned to lived with it.

Where in the history of the human experience, have people in a position of power shown themselves to be immune from the enticement to abuse that power? The heads of the major news media believe that it’s possible, at least here in Finland. The apologists within the media will be quick to say that there are checks and balances within the profession, but that’s laughable on its face.

Yes there are good journalists, and they ply their trade under very difficult work circumstances due to a work environment that does not take too kindly to “mavericks”, who take dissenting views from the herd mentality. The TT knows many journalists (local and abroad), some of which have worked in different foreign news rooms here in Finland. The TT has been told on countless of occasions about what goes on in these news rooms, and much of it would make the most avid supporter of the local news to lose heart in the system. It’s that bad.

Until the news media begins to take a more critical view of their news reporting style, and a closer look at the way they sift the international news,…for news, for the domestic market, then nothing will change. Thankfully we have the Internet to turn to for alternative news reporting. Long live the Tundra Tabloids. KGS