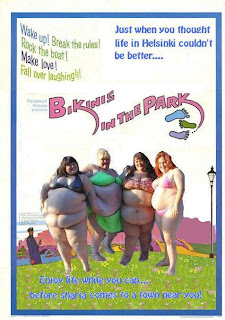 The Helsinki City Council has continued its dithering on the subject of whether park observers can dictate to parents what they can and cannot wear in the city’s play parks.
About six weeks ago, there was an incident that came to light about a mother who was keeping an eye on her two sons splashing around the pool in a children’s play park. The woman decided to catch a few rays of sun while the kids played, which drew the attention of one of the park’s attendants who was asked her to cover herself.
Helsingin Sanomat: The City of Helsinki is unwilling to take a direct stand on whether or not adults are allowed to wear a bikini in the capital’s children’s play parks. The heated bikini & strings debate was launched in July when Helsingin Sanomat reported that a mother, sunbathing on a blanket by the pool, was asked to cover up in the Tapuli residential park in Helsinki’s suburb of Tapaninkylä.
The city’s Social Services Department issued a written statement, saying that ”In children’s play parks people are advised to wear clothes which comply with the general norms and the situation”. Paula Kokkonen (National Coalition Party), the Deputy Mayor in charge of social affairs and public health, admits that the statement is not unambiguous, and can be interpreted in any number of ways in the ear of the hearer. However, she also suggested that an adult should not wear a bikini in a children’s play park. ”I’d like to call for common sense”, Kokkonen noted.
Now the article does not go into any detail of whether the woman’s bikini was improper or not(like a string), but that it was …just a bikini. As far as the Tundra Tabloids has learned, it’s not a “bikini & strings debate”, just a bikini debate, due to immigrant Muslim sensibilities being offended. Paula Kokkonen (conservative) is clueless to what she is up against, her sense of common sense is pure tomfoolery. And lets be frank here, no kid could care less what an adult is wearing, especially one wearing a bathing suit in the vicinity of a pool.
Good taste is a matter that needs to be debated in full, for it appears that there are those in our society that seek to impose their own sense of morality upon others. Being civil towards others is a common courtesy that should be applauded, dictating to others what they can and cannot do because of…being offended, should not be applauded. Today its your bikini, tomorrow it’s your whole way of life.
Also in a related issue, the Tundra Tabloids was alerted to a Muslim gender apartheid swimming school where Muslim girls are taught to swim in a “boy free” environment. It’s ALWAYS a slippery slope when division of the sexes are allowed due to Muslim sensibilities, it is very likely that it will lead to even more concessions to political Islam.
But that’s not all!
They are also trumpeting the fact that the “Muslim girls only” swim school is to be followed by a three hour swim period for Muslim women only. That is a direct violation of Finnish civil liberities and needs to be contested as much as the sharia in the park statutes being enforced by the Helsinki park system. Good grief, and Finland has only 30 000 Muslims, and yet we have all this, plus the Finnish Islamic party. Not even Sweden has such a party, and they have over 500 000 Muslims. KGS
H/T: Jussi K