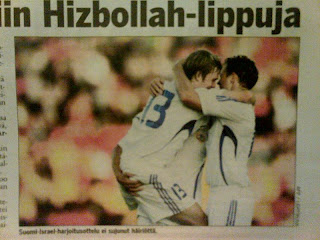 A friendly football match between Israel and Finland took place a couple of days ago in the Finnish city of Tampere, at least on the field it was all sports, but not in the stands.

Israel’s ambassador to Finland, Avi Granot, (whose parents were saved by ending up on Oscar Schindler’s list) was witness to the spectacle, as Arab supporters of Hezbollah watching the football match, took to waving flags of the Lebanese terrorist organization, as well as unrolling banners in Arabic that can be pretty much guaranteed to be as volatile and acerbic as the anti-Israel slogans being shouted.

According to the wood version of the Finnish tabloid paper, Ilta-Sanomat, the sponsors of the event confiscated all the anti-Israel material being waved around by the supporters of terrorism, and removed the pro-Hez squad from the stands. According to the article, Kimmo Lipponen, the Finnish Football secretary, said that all political demonstrations at matches are expressly forbidden.

BUT THAT’S NOT ALL! Far Leftist Finnish MP, Paavo Arhinmäki (Vasemmisto= The Left) was also in the stands watching the match and didn’t find anything out of place with the banners, Hez flags and anti-Israel slogans being bantered about by the supporters of terrorist group. NO, quite the contrary, he found them to be appropriate:

Paavo Arhinmäki: “A gang (edit: good term) was shouting something about Palestine but I didn’t see anything in it that that was inappropriate. Arhinmäki stated. […] I didn’t shout anything myself during the match,´that nothing could be said of it. I’m very careful about that.”
Well the Leftist Arhinmäki would be wouldn’t he? This goes to show once again the nexus that exists between the Left (wherever it exists) and the radical forces of Jihadi Islam. They are like two peas in a moldy pod. One of the sadder aspects of the whole affair, was the fact that as a child of Holocaust survivors, Ambassador Avi Granot, was forced to listen to the jihadis calling for the destruction of Jews and Israel.

Yeah, I know, since he’s a diplomat, Ambassador Granot has more than likely seen and heard similar things in times past. But still, he’s a human being, and some things are so vile that one can never get used to them, unless you happen to be a Leftist MP in the Finnish Parliament that is. KGS

H/T: The ever reliable and indispensable Vasarahammer
NOTE: Ambassador Granot keeps a blog, (in Finnish and in English) though it’s not updated daily, it does warrant a periodic stop over to see what’s up.
UPDATE: TT sources claim that it was Finnish MP, Paavo Arhinmäki who was behind the demonstration from the very beginning. When it looked like the pro-Hez demo wasn’t going to make it into the press, Arhinmäki contacted the Ilta-Sanomat himself.
While it can’t be proved, it sure does fit the profile of Leftists like Arhinmäki, who in his own words in the interview, approves of the Hezbollah. The word SCUM comes to mind.
UPDATE: TT sources say that it was Israeli security that notified the Israeli Ambassador of the flags and banners etc., so he was spared the sight of seeing terrorist propaganda being flaunted at the sporting event.