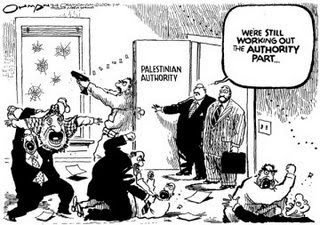 Since the streets of the West Bank are crawling with enough Palestinian riff raff already, there was no desire to add to that number.
J’lem Post: “The Palestinian Authority’s refusal to receive members of the Hilles clan who fled the Gaza Strip Saturday did not come as a surprise to many Palestinians.
[…]
One is related to Abbas’s fear that the presence of the Hilles “refugees” in Ramallah and other West Bank cities would damage his efforts to impose law and order there. The powerful Hilles clan had established their own “mini-state” in the Gaza Strip, where they had their own extraterritorial “security zone” and militia.
The clan, which has long been affiliated with Fatah, had a military training base and a number of small factories for manufacturing various types of weapons. Several members of the clan were also involved in various types of criminal activities, including murder, rape, kidnappings and extortion, according to sources in the Gaza Strip.
Bringing dozens of these clan members into the West Bank would have caused a big headache for Abbas, who is still facing difficulties in reining in numerous Fatah gangs that are continuing to roam the streets of West Bank cities and villages. The last thing Abbas needs is another 180 bitter Fatah thugs from the Gaza Strip patrolling the streets of Ramallah, Bethlehem and Nablus and imposing a reign of terror on the local population.”

As John Hinderaker over at Power Line blog commented just a day or so ago about Barack Obama’s claim to bring “peace” between Israel and the Palestinians:

Of all the twisted and corrupt Arab cultures, the most dysfunctional, by far, is that of the Palestinians. This is because, for more than a half-century now, the Palestinians have been used by their fellow Arabs and Muslims as political tools. Abetted by the United Nations, the Palestinians’ fellow Arabs have kept them living in “refugee” camps for generations. The Palestinians’ commitment to terrorism has made it impossible for them to develop a functioning economy. Their educational system is a joke, dedicated mostly to perpetuating the same pathologies that have made the West Bank and Gaza among the world’s most miserable places. If Israel were to disappear tomorrow, the Palestinians’ pathetic situation would not improve an iota. If anything, it would get worse.”

That sums up the Palestinian situation in a nut shell. KGS