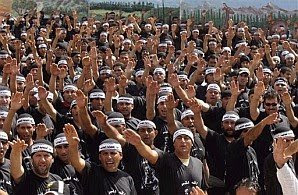 The Hamas is currently defanging armed Palestinian factions terrorist groups (like themselves), something that the Fattah has long avoided doing because they (Fattah), said it couldn’t be done without starting a civil war. But that hasn’t stopped the terrorist group Hamas from kicking butt and taking names.

J’lem Post: “Hamas scored yet another victory over the weekend when Fatah’s last stronghold in the Gaza Strip succumbed following a massive security operation in the Shajayieh neighborhood. When Hamas took full control over the Gaza Strip more than a year ago, it refrained from disarming many Fatah militias and clans that refrained from openly challenge the Islamist movement.

But after the explosion that killed five Hamas men and a seven year-old-girl on June 25, Hamas changed its policy and began confiscating weapons from Fatah groups, first and foremost the faction’s armed wing, the Aksa Martyrs Brigades. The massive crackdown that began immediately after the explosion reached its peak on Saturday, when a large Hamas security force raided Gaza City’s Shajayieh neighborhood with the aim of arresting men involved in the bombing.
The suspects, all members of Fatah, were said to have found shelter with the powerful Hilles clan, which had established its own “security zone” in the neighborhood. In the beginning, the clan’s men vowed to fight to the end, but by the evening most had surrendered to Hamas. Hamas has hailed the operation as a significant step toward asserting its exclusive control over the Gaza Strip.
The venture’s success also demonstrates that Fatah is as far as ever from achieving its goal of regaining control over the Gaza Strip. Ever since its humiliating defeat by Hamas in June 2007, Fatah has been unable to regroup and reestablish strong bases of power throughout Gaza. The crackdown on the Hilles clan and Fatah militias is designed to send a message that Hamas will no longer tolerate a situation where an armed Palestinian faction or clan operates as a state-within-a-state in the Strip.”
So instead of “moderate” Fattah (they’re not) exerting its control over all the terrorist organizations operating within the PA, it’s the Hamas that calls the shots. But then at the end of the day, whether a terrorist belongs to either Fattah or Hamas is of very little significance. The fact remains that presently, Israel has absolutely no credible Palestinian partner with whom it can negotiate with.
If Fattah was ever serious about peace in the past (some might have been but they weren’t the ones calling the shots) they should have been doing what Hamas is doing now, disarming the armed terrorist factions. The great irony is that the main terrorist organization, Hamas is doing just that, and successfully I might add. *L* KGS