This election year only gets more interesting as the weeks roll by. Over at Atlas Shrugs, Pamela “the darling” Geller has been hot on the trail of B.Hussein Obama’s forged birth certificate, ever since the Tundra Tabloids gave her the heads up on the Israeli Insider story on June 26. If the US mainstream media ever decides to pick up the story and begin to investigate it in meaningful way, all hell could break loose in the Democrat’s camp, as their presidential nominee’s candidacy becomes null and void, like his forged birth certificate. Thanks to Pamela and Techdude for sticking with it and seeing it to the very end. Go get em! *L* KGS 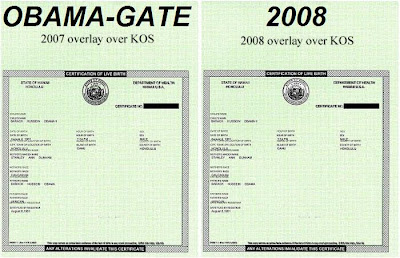 Pamela Geller: Techdude delivers a final report that exceeds my wildest expectations. It is irrefutable, empirical evidence – Obama’s birth certificate is a forgery. Why? Why a COLB (certificate of live birth) forgery? That is the question.

My deepest thanks and appreciation for Techdude’s unwavering commitment to the truth despite the threats and harassment, the slashed tires and the dead animal on his porch. Insofar as “techdude’s” credentials, he is an active member of the Association of Certified Fraud Examiners, American College of Forensic Examiners, The International Society of Forensic Computer Examiners, International Information Systems Forensics Association – the list goes on. He also a board certified as a forensic computer examiner, a certificated legal investigator, and a licensed private investigator. He has been performing computer based forensic investigations since 1993 (although back then it did not even have a formal name yet) and he has performed countless investigations since then.Here is his analysis:
Obama’s Birth Certificate – CHANGE you can believe in.

I have decided to leave out the low level technicalities and the how-to section of this report due to a lack of time and more importantly I want to get the facts out as quickly as possible. As some of you may or may not know some asshat decided to track me down and vandalize my car and hang a dead mutilated rabbit from my front door in a lame attempt to intimidate me from proceeding with releasing any details of my analysis. They did succeed in delaying the report by a few days but instead of deterring me they just really pissed me off.

To their credit, if I had not taken a few days off from the analysis I would have missed the most damning piece of evidence – the remnants of the previous security border. So to the demented retard who slaughtered an animal to make a point – f*ck you and thank you. And because of the amazing number of violent psychopaths who seem to be drawn to this issue, I am not going to use or supply any details that can be used to identify the owners of the COLBS used in the analysis except for those which have already been publicly disclosed. If the owners want to come forward on their own that is entirely their decision. Now let’s get to the summarized report.
In questioned document analysis there are several methods for detecting forgeries – the most basic of which is to conduct a side by side evaluation of known good samples to compare against the questioned one and to use an alternate light source to highlight the changes in the color and density of the inks and paper. In the case at hand there are no questioned physical documents to examine so I used the same basic techniques modified for the digital age for use in computer forensic analysis.

The following analysis was conducted using various Hawaiian COLBS issued over a multi-year time frame ranging from 2001 through 2008 but this report will focus only on the results from the March 2007 through June 2008 certificates for accurately comparing against the KOS image purportedly printed by the Health Department of Hawaii in June 2007. I am only interested in comparing apples to apples as they say but I will touch on some of the other years for a brief comparative and observational analysis. More here. *L* KGS