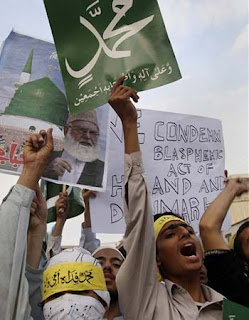 The government of Pakistan has unleashed a new round of veiled threats to those Nordic states it deems as violating Muslim sensitivities. Unleashing its missions in both Norway and in Denmark, the Pakistani government has given its ambassadors the green light“to try and intimidate the two states into getting their minds right.

The Copenhagen: Fauzia Mufti Abbas, Pakistan’s ambassador to Denmark, agreed that the Mohammed cartoons, first published in Jyllands-Posten newspaper in October 2005, had incited Muslim anger and were possibly the motivation for the attack, which killed eight and wounded as many as 30.

‘It isn’t just the people of Pakistan that feel they have been harassed by what your newspaper has begun,’ she said. ‘I’d like to know if your newspaper is satisfied with what it has done and what it has unleashed?‘ Abbas said, however, that it would be necessary to await the outcome of the enquiry before drawing any conclusions about who was responsible or their motives.

The matter of the cartoons, she said, was something Danes needed to reflect on. ‘Danes know that they have insulted people around the world by printing and reprinting the Mohammed cartoons, which were done in poor taste.’

Then the Baron at the Gates of Vienna has the following on the shakedown that happening in Norway:

The other day I posted about a Mohammed-insulting cartoon that was published in a Norwegian newspaper. Now it seems that Norway has reached Step 6 in the good ol’ Islamic Shakedown: the Pakistani ambassador to Norway has issued some thinly-veiled threats (as translated by our Danish correspondent Kepiblanc):

Ambassador: Caricature is Terror Pakistan’s ambassador to Norway calls the caricature in Adresseavisen ‘terror’ and fears that Norwegian lives might be lost as a consequence of it.Earlier this week the newspaper published what is seen by many as a caricature of the prophet Muhammad. The ambassador fears the consequences when the drawing becomes more widely known in large Islamic countries, such as Pakistan.“Muslim societies all over the world will be offended. This is an act of terror,” says ambassador Rab Nawaz Khan to TV2.He thinks that the publication might stir up strong reactions and that people might lose control. Consequently, Norwegian lives might be endangered, he opines.“Don’t forget that there are many Norwegian companies in Pakistan,” says Khan.The embassy has handed over a formal note of protest to the Ministry of Foreign Affairs (UD).Spokeswoman Anne Lene Dale Sandsten of the UD says that the protest is taken seriously, but she declines to comment in detail about the ambassador’s claims. She fears that doing so might escalate the whole affair.

So there you have it folks, expect the Islamic “shakedown” after Mulsims, being outraged over some insult, start to violently protest in the streets. There really is some kind of orchrestrated method to their madness, and it’s up to us to remind our elected officials that they are not to give into these veiled or open threats under any circumstaces.

The Islamic world is responsible for the conduct of its own people, and if Muslims commit heinous acts while protesting, the fault lies with them, not with those who craft pictures or statements of ligitmate protest against tyranny. In other words, get bent. *L* KGS