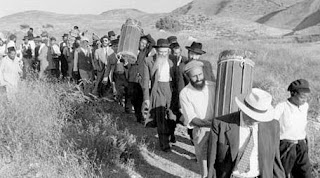 I suggest that there should be a counter protest on the Israeli side of the border with Lebanon, which would highlight the fact that over 800 000 Jews were forced to flee from their homes throughout the Middle-East.

More than 100,000 Palestinian refugees living in Lebanon are expected to march toward the border with Israel on May 14 in the context of the Palestinian Authority’s plan to mark the 60th anniversary of the establishment of Israel, PA officials told The Jerusalem Post Thursday. […]

Fatah’s top representative in Lebanon, Sultan Abu Aynain, has also been instrumental in organizing the event, the Post has learned. The two have been coordinating their efforts with PA Deputy Minister for Prisoners Affairs, Ziad Abu Ein, who has drawn up a plan calling on Palestinian refugees to “invade” Israel by land, air and sea in protest against Israel’s anniversary celebrations.

The plan states that the Palestinians have decided to implement United Nations Resolution 194 regarding the Palestinian refugees. Article 11 of the resolution, which was passed in December 1948, says that “refugees wishing to return to their homes and live in peace with their neighbors should be permitted to do so at the earliest predictable date, and that compensation should be paid for the property of those choosing not to return.”

Riiiiight, good ol’ UN Resolution 194. Most importantly, Article 11 of the non-binding resolution also states that: “to facilitate the repatriation, resettlement and economic and social rehabilitation of the refugees and the payment of compensation.” That is something that the Arabs care little for, taking care of their own. The Israelis on the other hand, have done done just that, and besides, Israel has taken in some of the Arab refugees after the 48 war and 67′ war. The Arabs have done absolutely nothing other than using these people as political pawns.

The resolution never mentions the nationality of the refugees in question, since people on both sides of the conflict have their own refugees, but interestingly enough, NO ONE EVER TALKS ABOUT JEWISH REFUGEES. When Israel sits down to discuss refugees, it automatically assumes that the issue of Jewish refugees are also to be discussed.

To bad for the anti-Israel nay-sayers who love to rant and rave on and on about the Palestinian refugees, whose numbers are no more than 200 000 people. Jews in Middle-Eastern states were expelled or intimidated to leave through violent rampages or though other systematic “dhimmi” related measures, that in the end, had its desired effect. Ethnic cleansing of Jews from Muslim lands.

Wrap your minds around that one for awhile, thinking very hard about how the Arabs have managed to successfully snooker the West into talking about only one set of refugees. Why they even managed to get their own refugee organization of their very own! The UNRWA is one of two refugee orgs run by the UN, THE REST OF THE WORLD’S REFUGEES HAVE TO USE THE OTHER, UNHCR.