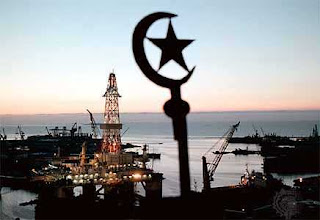 The Tundra Tabloids supports the West’s reducing its dependence on Arab/Muslim oil. The best possible scenario would be for the West to find alternative, viable fuel sources to drive its economies.

So when the next best thing comes around-a-knocking (11.07), the discovery of major oil fields off the coast of Brazil, the process of divesting from Middle Eastern oil looks all but inevitable.

Just late last year, the president of Brazil declared that the price of oil should go down, which is welcome news since the price of crude has been sky rocketing over the past two years. But with the good news also comes a down side, which spells an increased uncertainty for the continued stability of the Middle East US interests begin to look elsewhere.

— Brazil’s discoveries of what may be two of the world’s three biggest oil finds in the past 30 years could help end the Western Hemisphere’s reliance on Middle East crude, Strategic Forecasting Inc. said. Saudi Arabia’s influence as the biggest oil exporter would wane if the fields are as big as advertised, and China and India would become dominant buyers of Persian Gulf oil, said Peter Zeihan, vice president of analysis at Strategic Forecasting in Austin, Texas. Zeihan’s firm, which consults for companies and governments around the world, was described in a 2001 Barron’s article as “the shadow CIA.”

Brazil may be pumping “several million” barrels of crude daily by 2020, vaulting the nation into the ranks of the world’s seven biggest producers, Zeihan said in a telephone interview. The U.S. Navy’s presence in the Persian Gulf and adjacent waters would be reduced, leaving the region exposed to more conflict, he said.

“We could see that world becoming a very violent one,” said Zeihan, former chief of Middle East and East Asia analysis for Strategic Forecasting. “If the United States isn’t getting any crude from the Gulf, what benefit does it have in policing the Gulf anymore? All of the geopolitical flux that wracks that region regularly suddenly isn’t our problem.”

Now that particular scenario may be sending serious warning signals to Israel, the US’s chief ally in the region, which despite all the troubles with its neighbors, is still seen as a stabilizing factor in that violent region of the world. Though battles have indeed been fought between Israel and Lebanon, and to some extent Syria (remember the just bombed nuke facility), and the Palestinian issue still remains unsolved (if it ever will be), the fact remains that Israel has been able to maintain the status quo in the region and therefore, is still viewed by the US a valuable ally.

Any talk about the much discussed -and over hyped- power of the American Jewish lobby in determining Israel’s continued overall standing with American foreign policy decision makers, must be viewed under the rubric of the just mentioned. The determining factor of how valuable Israel is as an ally, is first viewed as how best Israel maintains the status quo, in other words, stability.

The recent oil discovery in Brazil however, would appear to change the dynamics in US foreign policy vis-a-vis the state of Israel, and that warrants further discussion and analysis. One thing is for sure, the impact of the pro-Israel lobby on how the average American views a fellow democracy, has been minimal. Americans are just prone to side with a state that shares the same moral, liberal, democratic values as themselves. So in that respect, I see very little change in US foreign policy with Israel.

But what is certain to be become an inevitable reality, is that Israel must continue to prove its worth in order to maintain its importance to the US in that region of the world. There can be very few, if any, stalemates like the Lebanon war in 2006. *L* KGS