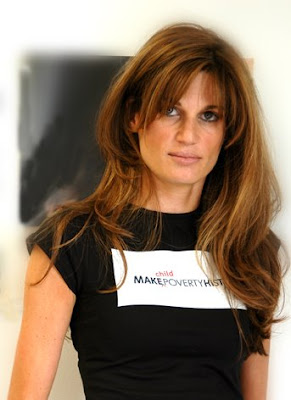 Well it doesn’t take too much to piss off the jihadis, now does it? Jemima Khan, a convert to Islam and former wife of Pakistani Imran Khan, received a death threat from Muslim Extremists (you know the kind, the ones who truly believe that prophet of Islam offers the supreme example in everything) for supporting a supposedly “moderate” Muslim think tank.

Ok ok, the Tundra Tabloids has hoped in the past that “modernist Muslims” would finally come forward, and present themselves as a viable alternative to their fellow co-religionists, of whom most are not too thrilled with the cavemen-like mentality of the jihadis and other Islamists of every stripe.

But when one looks closer at the organization, one begins to see some worrying signs that not all the I’s are being dotted and the T’s being crossed. Robert Spencer has this to say of the counter extremism think tank, called the Quilliam Foundation.

Spencer: “Unfortunately, however, this is yet another case of the Moderate Emperor’s New Clothes.

“A new Muslim think-tank, which aims to bring together voices who oppose violence and extremism, and who want to explore Islam in a modern European setting, was launched at the British Museum yesterday. Author Ed Husain, who charted his own journey away from what he calls “a dark place” in his controversial book ‘The Islamist’ is a prime mover in the venture, along with Essex-born Maajid Nawaz.”.

Ed Husain is the author of The Islamist, a book about how he entered and then left the jihadist group Hizb ut-Tahrir. Last year he debated Ayaan Hirsi Ali, and subsequently wrote a piece in The Guardian, “Stop supporting Bin Laden,” about how Hirsi Ali, my dear friend Ibn Warraq and I are playing into the hands of Osama bin Laden himself by noting the deep traditional foundations within Islam of the jihad ideology. I wrote about it here. You can see at that link that Ed Husain in his piece wrote disingenuously about Islamic teaching on apostasy and other matters, and ignored the deep scriptural, theological and legal foundations of Islamic violence and supremacism. Hardly a promising performance for a genuine reformer.

The Quilliam Foundation (named after a 19th century British convert) is being pitched as advancing the counter-argument to extremism. The founders say Islam in its purest universal form, as what Muslims believe is the last global message of God to humankind, sits perfectly well in modern multicultural societies – providing that Muslims find the right way to express their faith. If British Muslims rediscover the purity of the faith, they argue, they can cast off the political and cultural baggage that would see Islam as the enemy of the West.

These bland and reassuring statements stop short of actually saying that the supremacist tradition within Islam must be rejected and opposed by Muslims. All this pleasant tosh about Islam fitting in with multicultural societies and not being seen as the enemy of the West could easily come out of the mouth of the most committed, but clever, jihadist. He would not even be lying — he’d be working from the proposition that Islam allows for something of a multicultural society, provided that non-Muslims stay in their place as dhimmis and do not aspire to rights equal to those of the Muslims. And he’d have in mind the idea that Islam is not the enemy of the West, but the friend of the West, the friend that wants to give the West a gift — the gift of the law of Allah. I have seen jihadists say exactly these things. Thus it is not reassuring to see them come from a foundation supposedly dedicated to moderate Islam, and named, significantly enough, for an English convert to Islam.

think-tank aims to develop its arguments out of the Islamic theological tradition, rather than simply use Western secular arguments against versions of political Islam which it regards as distorted and damaging. Its founding statement says: “Western Muslims should be free from the cultural baggage of the Indian subcontinent, or the political burdens of the Arab world. We were born and raised in a milieu that is different from the Muslim East.

As such, our future and progeny belong here.
“Just as Muslims across the globe have adopted from and adapted to local cultures and traditions, while remaining true to the essence of their faith, Western Muslims should pioneer new thinking for our new times. Here, Muslim scholastic giants, such as the noble Abdullah bin Bayyah and Shaikh Ali Goma (Mufti of Egypt), have provided ample guidance.”

Not reassuring. Ali Gomaa is the statue-hatin’, wife-beatin’, Hizballah-supportin’, Muhammad’s-urine-drinkin’ Mufti of Egypt, who not long ago denied reports that he had rejected the traditional Islamic death sentence for apostates. The delirious Dinesh D’Souza has praised him as a “traditional Muslim” with whom American conservatives should cultivate an alliance. I do not think Americans should be so naive, and do not think that the Quilliam Foundation’s invocation of this man as a moderate bodes well for its own claims of moderation.

Has Khan indeed backed the wrong horse as well as getting a fatwa for her troubles? Well one should know what group one is backing, as well as how the fanatics are going to react to her own choice of lifestyle. It’s ironic that she’s not really backing any real modernist Muslims and getting her life threatend for her troubles. More here.*L* KGS