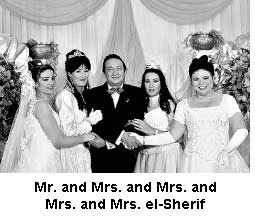 The recent raid on a Mormon cult in Eldorado Texas, provides ample reasons why the institution of polygamy should not be tolerated in any shape, form or religion. The authorities were sent to the retreat looking for a 16 year old girl who had informed the state that she has been physically abused. She supposedly is married to a 50 year old man. Sick.

I came across an article from the Wall Street Journal that points out the logical reasons why multiple wife arrangements are never a good thing.

In the poorer suburbs of Paris, polygamy is common, if illegal. Bernard Accoyer, the parliamentary leader of the Gaullist Party, blamed polygamy for the recent riots in Muslim neighborhoods. He was denounced for his supposedly racist views, but his theory has much to recommend it. Polygamy not only keeps families in poverty–one man must provide for many wives and children–but also creates a large population of young single men with little to do.

The U.S. outlawed polygamy in 1862–our leaders at the time compared it to slavery. But we still have a population of polygamists who live in isolated communities throughout the western states, many of them part of the Fundamentalist Church of Latter-day Saints (not affiliated with the Mormon Church). They have not caused chaos in our major cities, but they are responsible for plenty of social havoc: physical abuse, incest, child-marriage, tax evasion, welfare fraud.

Well well, it appears that’s just the case in the situation in Eldorado Texas, where the same girl in question had a baby eight months ago when she was fifteen. So assuming she carried the child to full term, that means she had sex with a middle aged man while she was fourteen years of age. The West has been at the forefront in criminalizing polygamy and with good reason, it is not conducive to a healthy family life, while posing great problems for society in general when allowed to become a wider phenomenon.

Here’s another reason to come down hard on the polygamists, regardless of what religion they belong to, as well as a classic example of political correctness gone haywire. A Muslim caught speeding in Scotland should have had his licence suspended, but due to his plea for leniency because such a ban would restrict his commute between his two wives, the judge allowed him to retain his licence.

“He has one wife in Motherwell and another in Glasgow and sleeps with one one night and stays with the other the next on an alternate basis.” More here.

Boo flipping hoo. So in spite of laws on the books against polygamy, here’s a man that not only escapes drivers licence suspension, he gets to keep both his licence and his wives at the behest of the Scottish state. Pure buffoonery. More here.