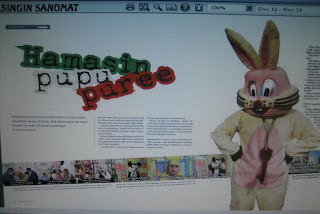 The Finnish capital’s main news daily, the Helsingin Sanomat sinks itself even further into the depths of moral/cultural relativism, and doughy minded apologetics for Palestinian child abuse.

In its free monthly edition of the Kuukausiliite, HS journalist, Ilkka Malmberg wants us to better “understand” the Hamas terrorist bunny, Assud, by placing Assud in the proper context.

“Assud-bunny might appear shocking in a country where children’s books have Peppi Longstockings and Emil as the main characters. But in Gaza this is routine”.

Using highly failed logic, Malmberg wants the reader to believe that since the violence is an everyday occurrence within Gazan society, having a terrorist bunny promoting violence and suicide on a children’s show, is somehow not to be unexpected. UNBELIEVABLE!

“But does the bunny bite?”

He goes on further to explain with the help of researcher, Minna Saarnivaara, who is supposedly an expert on Hamas, who states that:

“though she can’t say whether the terrorist bunny has had an effect on the children, the martyr narrative can be seen throughout Palestinian politics, and especially within Hamas.”

What’s of course missing in the analysis, is the brainwashing aspect of the programing, that helps to keep the steady level of incitement directed against Israel and Jews. It has nothing to do with depicting what children see, but with the instilling of hatred towards Israel in order to continue the conflict. Even if that were true, that they were only showing what the children see on a daily basis, it would still constitute a very morbid form of child abuse, and apparently the HS finds no problem with that.

They’re (the HS) apparently at pains to explain away the obvious, the indoctrination of the Palestinian youth with violence and hatred, that they lower themselves into being apologists for Hamas’ child abuse of its youth. All this in a supposedly “top notch” news paper that prides itself with its informative reporting abilities.

The HS is not fit to place in the bottom of a bird cage. *L* KGS
H/T Vasarahammer
NOTE: A little clue to Malmberg, there are plenty of international agreements that safeguard the rights of children. I believe that the right to a healthy childhood, free from hate indoctrination to incite murder, suicide and mayhem, is included on the list.
UPDATE: This whole disgusting mess reminds me of the message by Lebanese Christian, Brigitte Gabriel, who experienced first hand the Arab incitment of Israel and Jews. View the video here