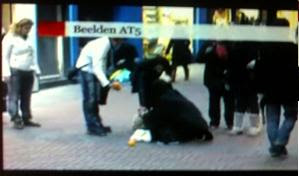 The multiculturalists in Holland have to prove that bigotry of Muslims exists, so they put a film crew to work to capture it all on film. So what happens when the people in the streets of Amsterdam don’t react as they should, the director improvises by staging the bigotry himself!

By way of Blazing Cat Fur comes this story of foul play at the hand of a dodgy director, and thankfully another film crew from a local TV station AT5, was at hand to capture on film what really took place.

Last week, a director working on a fake TV news item about racism in the Netherlands got caught with his pants down because a competing station happened to have a crew nearby filming the whole thing. The director had set out to film a piece exposing rampant bigotry by showing that people in Amsterdam will not stop and help a woman in need if dressed in a niqab.

In order to measure this bigotry, the crew’s reporter would drop a bag of oranges and see who would help her pick them up. After a while she would change to a niqab, a garb worn by some Muslim women that covers everything except the eyes, and repeat the exercise.

And it seemed the crew got exactly the sort of result they expected. When dressed as a Westerner, people would help the reporter pick up her oranges. But the moment she switched to the niqab, help was no longer forthcoming. The cold eye of the camera registered a forlorn woman, crouching in the middle of the street amidst her belongings, while passers-by took a wide berth around her.

Except that it was all staged. Local TV station AT5 was there, and filmed the whole thing. People who wanted to help the woman in the niqab were shouted at by the director who told them to move on. Even then that did not stop some of them to actually help. After 101 had streamed its program, AT5 contacted them for commentary. Originally, the youth channel denied that anything shady had been going on. They thought the attention was exaggerated, and that people only started to help when they saw the AT5 camera crew.

But the station must have smelled a rat, because it later examined raw footage, after which it came out with a full retraction. Apparently, people had been trying to help the niqab-clad woman the whole time. “We ended our collaboration with this director,” the press release concludes.

Only because of another film crew was at hand did this story ever come to the light of day, which leaves one to ask, just how many other similar incidents get by undetected? There was a similar attempt by NBC to try and uncover bigotry at a NASCAR racing event, and thanks to Michelle Malkin, the whole farce was uncovered before the project really ever got a chance to get off the ground.

This shouldn’t come as news to these “news makers”, but they are being watched as well, and when they’re caught making up the news instead of just reporting it, they end up being news themselves. Pure poetic justice. More here. *L* KGS

NOTE: Has the media been taking notes from Pallywood?