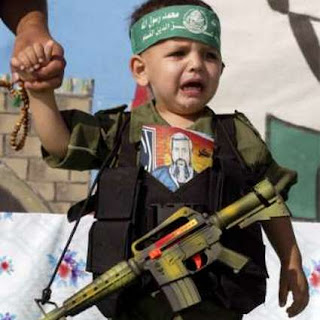 Child Abuse. No matter what the situation, the cynical use of the truly innocent, children, is to be condemned regardless of whatever the reason.
World Net Daily has the following. It strikes a blow to the center of the human heart. The Tundra Tabliods is sickened to death of it.
Hamas terrorists brag of hiding behind kids
A prominent member of Hamas, a recognized terrorist group, has been captured on video boasting of using women, children and the elderly as human shields in its firefights with Israeli soldiers.
WND reported at the time, just two weeks ago that the Israeli government had described Hamas’ use of human shields as Israel pressed ahead with its battles against rocket-fire from Gaza into Israel.
Israel launched ground and air assaults on Hamas positions in Gaza following massive rocket bombardments of Jewish cities by Palestinian terrorists at the end of February and early March. Hamas had been firing long-range Grad rockets at the strategic port city of Ashkelon, home to about 125,000 Israelis. Ashkelon houses a major electrical plant that powers most of the Gaza Strip.
During the fighting, focused largely on the minor Hamas infrastructure in the city of Jabaliya about one mile into the Gaza Strip, an Israeli commander speaking to WND Jerusalem Bureau Chief Aaron Klein from inside Gaza said Hamas has been drawing Israeli forces into populated civilian areas, shooting at Jewish fighters from occupied civilian homes while women and children were inside.
They know no depth of depravity, as long as their stated goal of destroying the Jewish state of Israel remains unaccomplished, children, yes children, are needed fodder to help fuel the Palestinian propoganda machine that feeds the world’s media bias towards Israel. It’s pure madness. The Tundra Tabloids requests from its readers who would beg to differ with its perspective, to please kindly explain why children are needed to help the terrorists wage war?
More here. *L* KGS
NOTE: Tundraman reports the video can be found here.