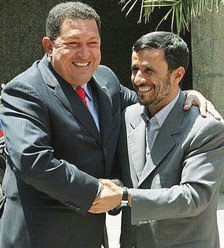 They are so pleased with themselves. Venezuelan potentate and his Iranian counterpart Ahmadinejad couldn’t be happier, anti-Semitism is unfortunately alive and kicking around the world and they have both had a major hand in helping to promote it.
J’lem Post: “The report states that today, more than 60 years after the Holocaust, anti-Semitism is very much an existing phenomenon rather than merely being a historical occurrence. Without detailing exact statistics, the study concludes that US embassies the world over have, in the last 10 years, recorded a rise in attacks against the Jews as well as damage to their property and to their religious institutions.
The report notes that in addition to traditional anti-Semitic acts, new types of the phenomenon have surfaced, manifesting themselves in harsh criticism of Israel which has fostered generalizations about Jews. This form of anti-Semitism, said the report, has gained a certain degree of encouragement from UN agencies. The study singles out several leaders and regimes who “fan the flames” of hatred against the Jews, including Iranian President Mahmoud Ahmadinejad, Venezuelan President Hugo Chavez, the Syrian government and Egyptian and Saudi Arabian state media.
The international news media -with a special emphasis on the international wire services- have also fed the flames of Jew hatred through its failed reporting on the conflict between Israel and the Palestinians. The skewed reporting accompanied with a litany of biased headlines and factually challenged editorials have had a damaging effect on how Israel and Jews are perceived around the world. Time for a wake up call to international main stream media, if they really care how their reporting is being understood. More here. *L* KGS