Hossain Salahuddin, a poet, essayist and an ex-Muslim who is the author of several books is interviewed at Front Page Mag. I’m always amazed at the depth of intellectual honesty and moral clarity of the people who leave the so called “religion of peace”.
The Tundra Tabloids has personally met many such individuals in Europe and abroad, whose own personal life stories of the difficulties they faced within that imperialist religion, are amazingly similar. Complete submission to the ‘status quo’ is not an option, it’s a directive, it’s a command, it’s either conform of your life will become very difficult, or even shortened.
Here is a snippet from the interview:

What always struck me the most was that Islam is another form of Arab colonialism in disguise. In South-east Asia you will see people constantly cry about the British Colonialism and how they are still a victim of it. However, no one ever talks about the Arab colonialism which is very active in every single non-Arab Muslim country.

Islam is in its origin an Arab religion, and it is not a religion of conscience, private belief or spirituality; it is very political and imperial. Its holy places are in Arab lands, its sacred language is Arabic, and its historical figures are all native Arab. So what happens to a non-Arab convert’s mind is very interesting.

A convert starts to dislike his own culture as non-Islamic and he becomes fascinated by the Arab influence and wants to be a part of the Arab story; ironically, he starts to praise the Arab Warrior who conquered his land. And to do that the first thing he does is to turn away from everything that is ethnically his and he lives in a world of fundamentalist fantasy to purify his non-Islamic culture.

You can see this neurosis and nihilism in the mindset of converts and you can say it is an incurable mental disease which has been affecting them and disturbing the societies for thousands of years. Arab colonialism is both political and cultural and I think it is the longest surviving form of colonialism. You see it is now a fashion to blame European Imperialism and colonialism, west and Israel in general – for every ill in this planet;

Muslims are never ashamed to join this blame game. But, when it comes to Arab imperialism or Islamic colonialism, Muslims feel proud and they admire the warriors who once came from the Arab world and conquered their forefathers’ land. Read more here.

The Tundra Tabloids is reminded of the Finnish convert jihadis and Islamists that started the Finnish Islamist Party, the FIP. Abdullah (Risto) Tammi and cohorts (may the flies of a thousand camels infest their armpits) are exhibiting the very same mentality in their rejection of their Finnish culture, because it’s … unIslamic. 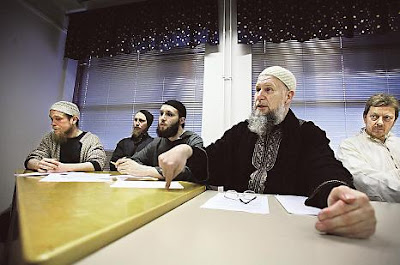 These Finnish convert religious imperialists are way over the top, and if given the chance, would turn Finnish culture on its ear. Meaning, no alcholol, no sauna, no dancing, no music (except for the call to Islamic prayer) and an end to public swimming as we know it. That’s just for starters. Yes, I believe that Hossain Salahuddin has hit the nail on the head. *L* KGS