Concerning the editorial decision by the Central Finland newspaper, The Keskisuomalainen, to print the highly inflammatory headline and nonfactual article, which was perhaps taken from: The Guardian: Israeli minister warns of Palestinian ‘holocaust’. 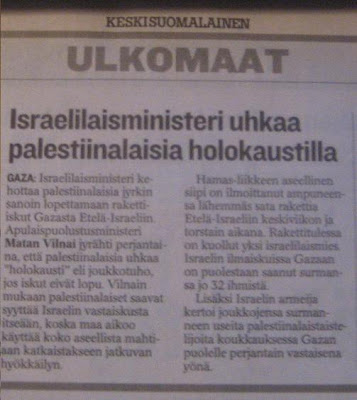 Tom Gross reports from the National Review Online that:

A Reuters mistranslation of remarks by Israeli Deputy Defense Minister Matan Vilnai this morning has triggered an international news libel against Israel. Among the news outlets jumping on the bandwagon are those that have previously been accused of deliberately attempting to stir up anti-Semitism through false and inflammatory coverage of Israel.They include several British-owned or British-based media. For example, at the present time the following headlines can be found on these websites:

The Times (of London): Israel threatens to unleash ‘holocaust’ in Gaza

In fact Vilnai said this morning in off-the-cuff remarks made on Israel Radio that: “The more the Qassam rocket fire [on Israeli civilians] intensifies and increases its range, the Palestinians are bringing upon themselves a bigger disaster because we will use all our might to defend ourselves.”

Vilnai used the word “shoah” (meaning disaster), which Reuters mistranslated as “Holocaust,” which is “HaShoah” in Hebrew. It is like confusing a “white house” with “The White House.” Given the virulently anti-Israel (and many would say anti-Semitic) track record of some of the news organizations who have jumped to prominently headline these mistranslated comments on their home pages, one wonders if they are making this mistake in innocence?

I would say that at least in the case of the Keskisuomalainen, it was intentional. They even went so far as to make sure that the reader knew what they meant, by inlcuding the word GENOCIDE in the article as well. Once again the facts discredit the more biased news outlets in the main stream media! More here.