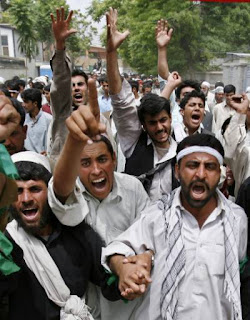 Place it all under the heading of boo-freaking-hoo.

About 1,000 Afghans, incensed by the republication of Prophet Mohammad’s caricatures in a Danish paper, marched in a northern city on Sunday demanding withdrawal of Danish and Dutch troops from the country.

The protesters, mostly religious clerics in the city of Mazar-i-Sharif, also condemned plans by a right-wing Dutch politician to broadcast a film on the Koran.

Afghanistan’s religious affairs ministry has called the reprinting of Prophet Mohammad’s cartoons as an attack against Islam. Several other Islamic countries have demanded that the film by the Dutch lawmaker Geert Wilders must not be released.

BOO HOO! The Tundra Tabloids could almost shed a tear in sympathy for highly outraged mob of offended religionists, but only if they were offended over the violence done in the name of their religion, Islam, through its jihad ideology! Until then, the Tundra Tabloids refuses to even consider their outrage, because they’re a bunch of spoiled whiners. I’ve seen similar behaviour exhibited on a playground or at the local toy store. Whiners I tell you , spoiled whiners! Dutch News has more!

Even the Dutch political loons are fuming! “Account must be taken of the serious risks to Dutch citizens and Dutch interests in various countries,” Jan Peter Balkenende, prime minister, said in a statement on behalf of the ruling -coalition.”

It is our duty to point this out to Mr Wilders. That is why we are publicly speaking out.”He added: “We have a duty to make clear to everyone that the methods and thoughts of one MP do not correspond to those of the government.”
The Tundra Tabloids is on record wishing Geert Wilders all the success in the world, in highlighting the anti-democratic inconsistancies in the present version of the Qur’an, Hadiths and Sunna, and contrasting that with our civil / human liberties and rights and our modern liberal democratic values. *L* KGS