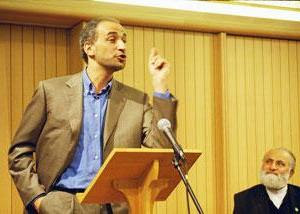 The silver tongued, Islamist propagandist himself, Tariq “Taqiyya” Ramadan, is slated to speak at a conference in Brisbane Australia, at the invitation of the Australian Left who believe that it’ll be just fascinating!
Under the title of: The Challenges and Opportunities of Islam in the West: The Case of Australia, to be held at Griffith University, on March 3rd, a gathering of useful stooges, academic appeasers and their ” soon to be Islamist masters” will be discussing the following objectives:

The objectives of this conference are to bring international and national experts together with local community leaders, decision makers and the media to raise awareness, improve understanding and discuss policy developments concerning Islam in the West, and Muslims as minorities of Western countries. The conference will address several important issues including:

Words of advice to the conference’s non-Muslim participants: IT’S THE QUR’AN STUPID!!!

Here is the real CONFERENCE OBJECTIVES:

1. Historical, cultural and political challenges of Islam in the West

In the promoting and expanding of Islam in the West

2. The role and contributions of Muslims in Western societies
In promoting and expanding Islam in the West. (Tariq Ramadan can therefore give a full length talk about himself and his life’s work)
3. Islam and multiculturalism,
How we (useful stooges & Islamist masters) can continue to pull the wool over the eyes, in that Islam represents “mutliculturalism, while history clearly shows that it actually represents monoculturalism.
4. Improving mutual understanding, cooperation and harmony – including the roles and responsibilities of the Muslim community, political leaders and the media
In that it all serves the Islamists’ goals of creating an elevated status for Islam, to be in effect, above all other ideologies and political systems. (The ongoing project of EURABIA being a prime example)
5. Socio-economic issues such as unemployment and underemployment.
How we can best keep it going, while increasing immigration of uneducated people from Muslim lands whose monthly unemployment checks are more than they what they can earn in 4- 6 months back home. How we can best exact the Islamic jizya tax going without the West actually understanding what they are involved with, an how their actions are being understood by the Islamic world.
6. Youth identity and self image
How we can best keep youths from integrating into western societies, in that their Islamic identity will always be stronger than their identification to the state in which they live. The Turkish PM and a Moroccan government minister offer fine examples of how to state the case.
7. The radicalisation of Muslim youth
How we can best promote the idea of victim hood for “youths” (they slipped a bit by including Muslim with youths) while denying any link of the “youths”radicalization to Islam.
It is a very sad day to see the likes of Ramadan and ilk holding a conference that will discuss the obstacles involved to Islamizing the West, as well as the best means to carry it out. Dr.Daniel Pipes has reasons why Ramadan was denied entry into the US, and why the Australians should refuse him as well. *L* KGS
H/T Baron Bodissey and the Sheik