Researchers Worried Over Collision Course Between Neo-Conservative Islam and the Racist Right.
YLE News delivered in the first six and a half minutes of its broadcast last night, one of the more ludicrous news segments covering the phenomenon of Islam and its radicalization that I’ve seen thus far, and that’s saying a lot.
Though in part factual, (which is something to cheer about where YLE is concerned) the news segment hovered between “being inventive and spreading propaganda.” The factual part of the segment mentioned that messages supportive of radical Islam, are being spread throughout the world via the Internet from Saudi Arabia and from Egypt, but as Vasarahammer notes here, it’s an already well known fact.
One of those Interviewed was Islam researcher, Marko Juntunen from the University of Helsinki, who has been following Muslim Internet chat room discussions. Surprise surprise, Juntunen has seen an increase in the use of texts originating from Saudi Arabia, as well as an increased visibility of conservative Muslim voices. More and more material -funded by the Persian Gulf states– are found on sites in both Arabic and English, then from English translated into Finnish, outside of that, there was “no new news” here. The rest of the segment became a twisted version of news telling and wholesale propaganda.
YLE: “A new form of conservative Islam/neo-conservative Islam” is being discovered by researchers following the development of Islam in Finland” (paraphrased).
Journalist Päivi Koskinen states that the “new kind of conservative Islam” doesn’t originate from just one place, but throughout the Islamic world. According to Juntunen, that Finnish converts to Islam are taking seriously the finer points of Islamic rituals from outside sources, like how many bites can one take before taking a drink, means some kind of neo-Conservatist Islam.
Koskinen then goes on to mention that one of the representatives of “neo-conservative Islam”, is none other than the Finnish Islamic/ist Party (FIP) bearded leader, Abdullah Tammi. (May the flies of a thousand camels infest his armpits). I mentioned earlier last year that, when the Finnish media latches onto a someone as a voice for a certain view, they then continually drag the same person into the spotlight, over and over again, as if they had something “more new” to tell the public.
So yes Abdullah Tammi’s carcass was brought into full view, in which the former Neo-Nazi, Communist and now radical Islamist, promotes the idea that life under the Taliban and Somali Islamic Courts were one of “law and order”, before the “satanic US” turned things upside down. He also mentions that he first became interested in Islam through the messages being relayed from N-Pakistan, the home and hot-bed of Taliban Islamism.
What worries the University of Helsinki researcher the most, is that these so called “neo-conservative Islamists” are getting on the nerves of the “far-Right”, which could develop into a cycle of violence. Of course he fails to mention what “far-Right” he is referring to, and since Juntunen’s thesis and the YLE report are plainly juxtaposing, radical Islamism ( supposedly neo-conservative Islam) with that of far-Rightism, (neo-Nazism…?), we are then left to assume they are both creating and promoting a highly mythical scenario, which of course doesn’t exist. The National socialists and the radical Islamists are united in their hatred of Jews and of Israel, and of world capitalism.
At this point in history, the Left’s bastard child, National Socialism, has been too infatuated with the nihilism and the new world order that Islamism brings, to oppose its being spread. Besides, Adolf Hitler admired Islam, so much so that he despaired over Christian Europe’s victory at the Battle of Tours, which stopped Islam’s advance into the European heartland. The whole thesis is full of holes, which doesn’t make any connection between rabid anti-Semitism by Muslims in general and Islamists in particular, with that of the National Socialists.
The only people that are offering any concerted front against the dangers Islamism poses, has indeed been coming from the conservative side of the political aisle, but also from the Left, like Christopher Hitchens, Paul Berman and others. Those voices on the Right cannot be considered “far Rightwing” as to be lumped into the same camp of BNP and FNP and other hard line political parties. Both Juntunen and YLE are guilty of mixing “apples and oranges.” 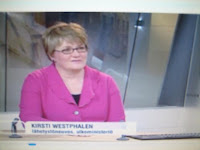 What follows next in the interview with Kirsti Westphalen (MFA), can only be described as surreal and farcical. Vasarahammer wrote more about it, but I’ll just mention in brief that, Finnish bureaucrats and the offices they represent, are so clueless as to how their policies of unfettered immigration from Muslim countries will bring damage to their own country, that it’s simply shocking.
They speak about ensuring that the immigrant will find proper housing, opportunity to learn good Finnish speaking skills and an opportunity to work etc. But as Vasarahammer states in his own blog, Finnish officials believe that they have the “magic touch” that the rest of Europe does not, seeing that similar policies have failed elsewhere. Vasarahammer: “shouldn’t the new comers already have a workplace awaiting them before they arrive? Good point!
In conclusion, the whole idea of what Islam is, what the more radical voices intend, and who they are that object to their own Islamization has yet to be discussed and reported on in any meaningful way here in Finland. It is thoroughly frustrating as it is disturbing to see the politicians, academics and the media continually flapping their lips about something that they appear grossly incapable of comprehending.
The motto for these nitwits must certainly be, “when in doubt, make stuff up!” And if it is, woe unto us all. *L* KGS
NOTE: An after thought. The use of this new terminology (neo-conservative Islamism) offers a unique window into the minds of Finnish academics, media and -soon- the politicians. In order for them to even consider the harsh realities of Islam, a new terminology must be found to direct attention from Islam itself. And what more clever of a way to do that, than to call it neo-conservative Islam, it will by default be also compared to neo-conservatism of the Christian right!
They’re just muddying the waters even further because they can’t bring themselves to accept the bitter truth, that Islam, in its literal interpretation, is accepted by the majority in the Islamic world. Whether through their open admission of it, or through their silence, by their reluctance to challenge the traditional interpretations of the many calls for violence in the Qur’an, the Sunna and the Hadiths.