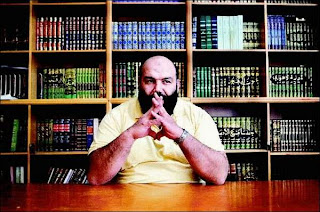 The Danish media’s reprinting of the Kurt Westergaard cartoon that depicted the prophet of Islam, Mohamed, with a bomb in his turban, has caused more unease and unrest this past week for the followers of the Mohammedan faith.

The Copenhagen Post reports that Imam Mostafa Chendid and Imam Abdul Wahid Petersen are not happy with the media’s role in printing more pictures of Mo, especially the one with a bomb in his turban. The Imams choose to speak with the media about their views, so let us review the words of the dear Imams a little bit closer shall we?

Imam Mostafa Chendid: ‘We work continuously towards integration but are always met with resistance by the media,’ he said.

More likely, it’s an expanded role for Islam in Danish society that drives the Imam. The media then points out the inconsistencies with Islam’s literal interpretation of its holy scriptures, and living within a modern liberal democracy which Islam seeks to influence. What the Imam is all upset about is being held to the very same standard that all other religious/political leaders are held to.

What has got Chendid’s own turban twisting around on his head, is that the fact that the ideology he is promoting, Islam, and its founder, Mohamed, are being held under a magnifying glass and criticized for the glaring lack of respect for human rights and respect for other religions.

Chendid: He questioned the necessity of reprinting the caricature of Mohammed wearing a bomb in his turban in response to the foiled plot to assassinate Kurt Westergaard, the cartoonist. Despite being critical of the reprinted cartoon and the subsequent deportations, he urged the Muslim community to remain calm stating that they should continue ‘building bridges’.

Commendable, but one would hope that the building of bridges would also include the rejection of a literal interpretation of violent parts in the Qur’an and the Sunnah, and a complete rejection of sharia, and never wanting to see Denmark become an Islamic state. Then perhaps Chendid’s attempts at bridge building with the non-Muslims might be a very welcome development indeed, for they would then be interpreted as being honest.

There was also a word of chastise directed at the young: ‘Mohammed did not teach you to burn schools, cars and public buildings. He taught you to behave in a civilised manner.‘

He is of course referring to Mohamed’s commands defining relations within the Islamic community, not with the “infidels”. Social and political relations between the Muslims themselves are very well defined, and since the violence is happening –for the most part– within Muslim areas, then his words can be interpreted as being correct.

The interesting part is that Imam Chendid does not spell out in clear terms that he was referring only to the relations within the Islamic community. There is one way of behaving within that camp, and a totally different way in dealing with the non-Muslim community. When Islam has the upper hand, then the relationship shifts and there’s nothing civil about it:

Sura (9:5) – “So when the sacred months have passed away, then slay the idolaters wherever you find them, and take them captives and besiege them and lie in wait for them in every ambush, then if they repent and keep up prayer and pay the poor-rate, leave their way free to them.”

That is just one of the 109 verses in the Qur’an that incite its followers to violence, they are open ended, so it’ll be difficult getting them to be interpreted as depicting historical events, like in the Torah.

Imam Abdul Wahid Petersen: ”The Danish media have not understood that it is important to have impartial grounds in any debate,’ he said. ‘It is not impartial to spit your opponent in the face.”

That is the price one pays for living within a modern liberal democratic society, you are subject to the same ridicule and rebuke from the other members of society that do not agree with you. The media’s choice to reprint the cartoon by Westergaard, was seen as crucial in relaying to the public the context of what the Islamic terrorists were all upset about.

The Danish Muslim community’s outrage over the initial publishing of all twelve cartoons of Mohamed, most likely played a crucial role in the minds of these would be murderers of Kurt Westergaard. They believed that their actions would receive privately a very large “high five” from Danish Islamic leaders, and then openly from the rest of the Islamic world.

The same Imam is all in a tiff over the prosepct of the three would be terrorist murderers being deported once they are sentenced, served time and then released. How much more evidence do you need that these Islamic leaders are a part of the problem, and the getting rid of them –through either deportation or removal from leadership roles– as a part of the answer? More here. *L* KGS