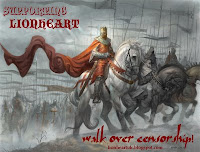 What does that say of the British government and its criminal justice system? A man –regardless of whether you agree with his thinking or not– has been summoned by the British police for writing something that others deemed “offencive“.

So the man is forced to flee his home and seek refuge in the United States of America. How embarressing it must be for the Brits to have its best friend and allie, the US, offering its protection to one of its own citizens due to the influences of a political correctness gone mad? Just how mad has the the world gone, that it has come down to this?

A controversial ‘web logger’ from Dunstable is seeking asylum in America because he faces arrest in the UK for stirring up racial hatred. Paul Ray, who regularly writes an online diary as ‘Lionheart’, was due to attend Bedford’s Greyfriars Police Station on February 18 as part of Bedfordshire Police’s investigation into his blog.

However, he has decided to apply for political asylum in America because he risks charges which carry a maximum prison sentence of seven years. His blog includes his opinions on the heroin trade, Islamic fundamentalism and police corruption. Mr Ray, 31, speaking to told Luton on Sunday on the phone from South Carolina, said : “I was going to meet Bedfordshire Police on Monday. But I don’t want to come back to England and get arrested.”

I had death threats in Dunstable and I wrote everything down.”I did it because if anything happened to me then I wouldn’t just be another statistic.”I have just written my thoughts down while I have been on the run.” I am applying for political asylum on the grounds of political persecution and human rights issues.”All I’ve done is written words on a blog. That doesn’t befit a prison sentence.”

Let us now get this straight, at a time when Imams in Britain are caught by camera preaching hate and incitement of non-Muslims, the British criminal system wants to pick up a lone blogger (with a miniscule readership) for writing how he sees the daily situation where he lives. Just how screwed up is that? More here. *L* KGS
H/T Dominique D.