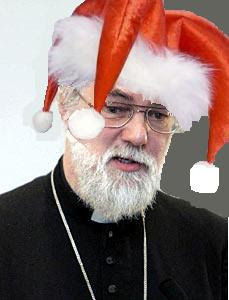 Dr Williams is in a “state of shock” and “completely overwhelmed” by the reaction of colleagues to his statements that the introduction of Islamic law, Sharia, into the UK is:”

unavoidable” and that it would help maintain social cohesion.” “That the UK has to “face up to the fact” that some of its citizens do not relate to the British legal system.”

He’s shocked, shocked I tell you!

That he’s shocked at all, tells just how far removed from reality the (to quote the Baron) Archdhimmi of Canterbury actually is. Not only are they outraged, they are demanding that he resign his post, and rightly so.

“The Archbishop of Canterbury was facing demands to quit last night as the row over sharia law intensified. Leading bishops publicly contradicted Dr Rowan Williams’s call for Islamic law to be brought into the British legal system. With the Church of England plunged into crisis, senior figures were said to be discussing the archbishop’s future.” […]

Officials at Lambeth Palace told the BBC Dr Williams was in a “state of shock” and “completely overwhelmed” by the scale of the row. It was said that he could not believe the fury of the reaction. The most damaging attack came from the Pakistan-born Bishop of Rochester, the Right Reverend Michael Nazir-Ali.

He said it would be “simply impossible” to bring sharia law into British law “without fundamentally affecting its integrity”. Sharia “would be in tension with the English legal tradition on questions like monogamy, provisions for divorce, the rights of women, custody of children, laws of inheritance and of evidence. “This is not to mention the relation of freedom of belief and of expression to provisions for blasphemy and apostasy.”

Kick the bum out!

The Anglican church’s second in charge, Archbishop of York Dr John Sentamu, is not having anything to do with Rowan’s nonsense. He simply said that “sharia law “would never happen” in Britain.” Even British Muslim politicians are speaking out against the Archdhimmi’s call for Islamic law to be brought into the British legal system.

“Shahid Malik, Labour MP for Dewsbury, said: “I haven’t experienced any clamour or fervent desire for sharia law in this country.”If there are people who prefer sharia law there are always countries where they could go and live.”

Exactly! Let the Finnish Islamists take heed to the wise words of Shahid Malik! Go elsewhere if you want to live under sharia law, it’s incompatable with our superior western style of democracy. If you want to live in an Islamist state, go to either Saudi Arabia or Iran, take your pick. But most telling of all, is the Muslim Council of Britain rushing to the defence of their of “boy Rowan”.

They described “his comments in a lecture to lawyers and a BBC interview as “thoughtful”.

But last of all, there is that silver tongued word weasel, that master of the art of taqiyya, Tariq Ramadan, weighing in with his two cents worth. I won’t bother reprinting what he said, for whatever he has to say in regards to Europe and Islam can be filed under “steaming pile“. More here. *L* KGS

UPDATE: 09.02.08 17:48 The Archbishop is in denial mode, but it all boils down to the same thing, he’s for accomodating sharia. The Islamists are using the small end of a very large wedge to constantly exploit for more and more demands. It won’t stop with marriage courts and halal meat.

“There is a huge difference between the use of Beth Din courts to resolve disputes and matrimonial matters without taking them to the civil courts and without being in conflict with British law, and the aspiration of extreme Muslims to apply Sharia law on a much wider scale.

While I am sure the Archbishop meant well I believe he misjudged the mood of the UK public and also got his timing for this kind of initiative badly wrong. One thing that concerns me is the effort the media is making to suggest there is a parallel with Beth Din courts. One thing is very clear Jewish law is never allowed to supercede the law of the land.”