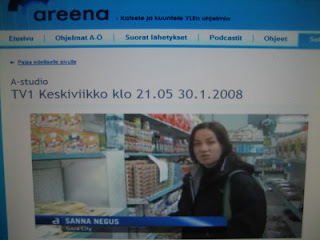 Disgusting is the only word that comes to mind to describe Sanna Negus’ ‘report’ on the situation in Gaza. Hamas’ talking points were on full display in YLE’s A-studio program last night, as Negus pandered to every bit of Hamas propaganda.

She once again mentioned the exploded border fence with Egypt, even stating that it was also cut by blow torches, but of course fails to mention that it was done MONTHS AGO.

Negus pictured Israel as totally to blame for the Gazan’s plight, even going so far as to cast it as a “collective punishment”. She then visits a grocery store somewhere in Gaza city, mulling over the fact that the store shelves are full:

“with even American micro wave popcorn being available, but no one has money to purchase hardly anything“.

Sanna Negus most likely can’t bring herself to ponder the condradictions in her earlier statements that Palestinians are on a huge shopping spree in Egypt. Lets see, money can be found to spend there but not in Gaza? Really? YLE is a pseudo news organization that openly disdains Israel in favor of the Hamas, a terrorist organization. Now how nice is that? *L* KGS

UDATE: 31.01.08 One Tundra Tabloid contact left me the following in an email, apparently YLE’s credibility is taking a severe hit with many Finns.

“yesterday evening TV1 aired a Sanna Negus documentary from Gaza. The old story about the bad Israel not providing the Gazans with electricity. And the desperate Gazan UN project managers with the old message `we have no electricity, no cement for projects, no materials, no this, no that, nothing..’ It looks like YLE is desperate to not to see the facts. Of course Negus didn’t bother to interview any Israeli. Why distort propaganda with facts?

Indeed, how balanced can an unbalanced TV company go. I now remember watching France or German TV channel (English edition) about the Gaza – Egypt border. They interviewed Gazans and several people accused the Arab countries for not coming to their help. I wonder if such an opinion could get through here?”

Note: Here is a prime example of how the media mimics the loony Left. Juan Cole is in the news again, with another deceitful diatribe leveled against the Jewish state. As far as I can tell, there is no difference between his views and Sanna Negus’ reporting. You be the judge.