They keep trying to perfect it don’t they? No matter how destructive any form of socialism has proven to be throughout history, Socialists of every strain keep trying to prove their failed system as the answer. 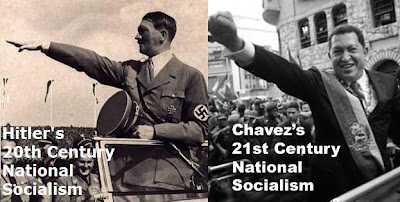 Today, Jacob Laksin over at Front Page Mag points out the dangerous parallel between German National Socialism and Hugo Chavez’s dream utopian Socialist state. What they both have in common is their shared desire to put the squeeze on its Jews. Its no wonder, since “Hugo the Red” has openly courted the Iranian sleeze monkey, Mahmoud Ahmadinejad, on numerous occasions.

They both share an open disdain for the Jewish state, with the sleeze monkey repeatedly calling for Israel’s total destruction. So it’s safe to assume that since Chavez has never officially condemned the Iranian sleeze monkey for his call for the genocide of Israel, he must be of the same opinion.

Hugo Chavez has long vowed to turn Venezuela into a laboratory for “21st century socialism.” But if the latest bully-boy tactics of the Chavez government are any guide, the better name for his platform might be 21st century National Socialism.

Most telling in this regard are the ruling regime’s rapidly deteriorating relations with Venezuela’s Jewish community. As reported recently in the Jewish Forward, it was only last month that a goon squad of government police swarmed down on the Hebraica Jewish community center in the capital of Caracas. Officially, the police had been searching for signs of “subversive activity,” the term’s definition having been expanded under Chavez’s ten-year reign to include any and all dissent from the government’s growingly authoritarian line. In the event, they found none, leading Venezuelan Jewish leaders to protest, compellingly, that the raid was little more than an act of state-backed intimidation and harassment aimed at the Jewish community.