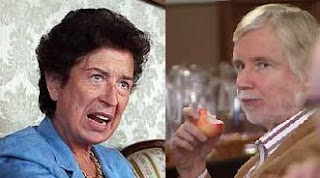 There is a reason behind the Rabbi’s refusal to meet with Rosa Russo Jervolino, the mayor of Napoli (pictured with Ol’ Sruffy). It is for the very same reason why Kings College professor, Efraim Karsh, wrote a very long article about Finland’s former FM, Ol’ Scruffy. Both compared Israel’s political situation with the Palestinians to the Nazi occupation.

The chief rabbi of the Italian city of Naples, Pierpaolo Pinhas Punturello: “I will not meet our mayor since I will be at the University of Federico II for the presentation of the book, Judaism and Literature, an appointment that I made well before this, and as usual, the mayor’s invitation was late,” the letter said. “

Anyway, I don’t believe I could meet Jervolino calmly after last October, when he faced a peace delegation of Israeli-Palestinian guests hosted by our city, provincial and regional governments, when he compared the Middle East political situation to the Nazi occupation, confusing the victims whose vile execution we want to commemorate,” the letter said.

“I want the dead to rest in peace: for this I cannot meet those who are capable of such statements and I feel instead that it’s incumbent to mark this painful memory and persecution of my people with a book that records Jewish contribution to world literature.”

The Tundra Tabloids’ fellow contributor, Tundraman, has something similar to add concerning Finland’s Minister of Immigration, Astrid Thors, who gave a speech at yesterday’s commemoration of the Jewish Holocaust.

Tundraman: Yesterday’s commemoration of the Holocaust victims was about words…

While those of Ambassador Granot were exactly the right ones, putting the finger on the worst kind of present-day antisemitism which nobody wants to see (threats to annihilate the state of Israel), our Minister of Immigration, Astrid Thors, made parallels to the persecution of Romas in present-day Europe which forces them to beg on Finnish streets.

Directly after delivering her speech, she then suddenly left the commemoration event without speaking a word to anyone. No one knew why she left, conveniently I might add, before Israeli Ambassador, Avi Granot was able to give his own speech. If it was not her intention to do so, it was most certainly interpreted as a political statement against the Israeli ambassador.

You see folks, while the Left continues to shed its crocodile tears for Jews murdered by European socialism during the 30’s and 40’s, it has little to spare (if at all) for present day Jewry. Astrid Thors and Erkki Tuomioja are just a few more prime examples of what ails Europe. More here. *L* KGS