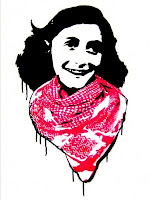 The depravity of it all. Dishonoring the memory of Anne Frank, a Dutch Jewish girl brutally victimized and murdered by the German Nazis during World War Two, a Dutch merchant places Anne Frank’s likeness on T-shirts and greeting cards sporting a Kaffiyeh around her neck.

The Arafat terrorist scarf has long become a fad for those who support Palestinian terrorism, and has even been used in an advertising campaign by the Finnish Journalist Union. The image of Frank in a kaffiyeh is disgusting and disrespectful not only to Jews, but for all those who have been murdered by the Nazi regime and their present day heirs, Islamic terrorists.

Al Avai brought this to my attention and also mentioned to me that, “It shows the extent to which the discourse in which the Palestinians become the Jews has extended into the popular consciousness of the Europeans.” Al of course is right. The “Palestinianization of Europe” as mentioned by Bat Ye’or in her book, Eurabia, has become the cornerstone of EU foreign policy in how it relates to both the Arab world and Israel.

The EU has for many years taken the Arab point of view towards Israel, making it the prism through which all foreign policies will be decided. European dhimmitude, from the top on down, expects its citizens to make every effort to support, as well as market the pet project of Europe, the Palestinians. From Spanish leaders to Finnish journalist unions, Eurabia can be viewed in all of its disgusting dhimmitude and shame. *L* KGS