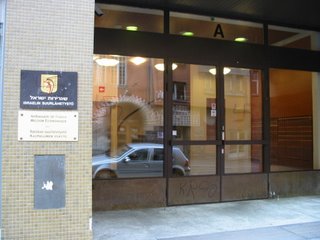 Exclusive: The Tundra Tabloids just received word from its Israeli MFA source, that supporters of the terrorist lead government in Hamastan (read= Gaza) will be mounting a protest at the Israeli embassy in Helsinki. The organizers – the Palestinian community in Finland- will probably be leading their dhimmi supporters in an assorted array of half-baked chants.

The last time the Israeli embassy in Helsinki was in the news, was when it became the target of an anti-Semitic attack, with swastikas being spray painted on its doors and on its plaque.

I doubt that the protesters will be protesting against the Islamist Hamas’ stealing of fuel and electricity away from its own people, nor protesting the gross discrimination against the Christian minority living in fear within the terrorist enclave. No, they’ll just do what they know best, and protest against the side whose public centers are being shelled indiscriminantly by terrorist thugs. *L* KGS

“Israeli officials claimed Monday that the Gaza blackout was deliberately instigated by Hamas, in a bid to present the appearance of a humanitarian crisis. According to the IDF, Israel was still providing 75 percent of Gaza’s electricity, while Egypt provided an additional 5%. Israel said that it was not interested in a humanitarian crisis in Gaza, and would “act quickly” to prevent it.”

Like the Tundra Tabloids reported earlier: “Much if not all of their problems have been created by the Palestinians’ leaders within the Gaza Strip, including the lack of electrical power and fuel.”