This al-AFP and al-Reuters news wire inspired article “We Don’t Even Have Candles”, in yesterday’s Keskisuomalainen (22.01.08) highlights the degree in which Palestinian propaganda is successfully parroted by the Finnish news media. 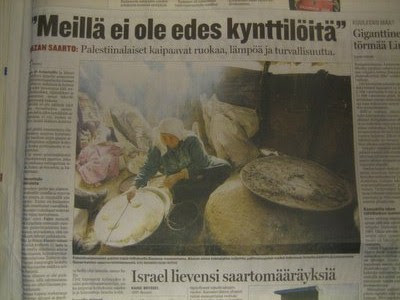 During the time period that Israel has seen a drastic increase in Qassam missiles being launched into Israel, the electronic and paper news media in Finland has failed to highlight the direct role Hamas has played in diverting the much needed electrical power and fuel away from its own public.

Much if not all of their problems have been created by the Palestinians’ leaders within the Gaza Strip, including the lack of electrical power and fuel. Hamas’ callous decision to steal fuel from hospitals, and to unnecessarily shut down Gaza’s power plant for so long, and to demand that bakeries close their doors though they were still flush with sufficient supplies and fuel, is nothing more than an effort to stage a huge propaganda ploy for an eager news media.

They, the Palestinian leaders themselves, are the ones guilty of diverting electrical power, while ironically, Israel continues to feed the Gaza Strip 70% of its electrical needs, even at great personal risk.[3.]

Scenes of Palestinians standing in protest with candles in their hands, does indeed create a powerful picture, but the actual truth behind that picture is one that is unfortunately not reaching the Finnish public. *L* KGS