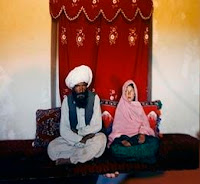 Remarks by a right-wing politician denouncing Islam and accusing the Prophet Mohammed of having been a paedophile provoked widespread outrage in Austria on Monday (14.1.08), with authorities investigating whether they constituted hate speech. More here.

So if any of my readers can point exactly where Susan Winter got it wrong, I will give your story TOP BILLING on the front page of the Tundra Tabloids. It is fatual history that Mohamed married 6yr old Aisha, and had sex with her when she was nine.
The picture is from Afghanistan, of Muslim man with his child wife, a legacy left by Mohamed to his followers to imitate. And they still do, because Mohamed is still believed to be the perfect role model, the perfect man. Yeah riiiiight. Here is a video of Susan Winters speech. *L* KGS
H/T: ESW

Correction: Vasarahammer supplies a better description: It is not factual history that Muhammad married Aisha when she was six. It is according to muslim scriptures that it happened. There are historical studies that dispute the origins of islam and even the existence of Muhammad as a historical person.However, what matters is what large number of muslims believe to be the case. That is a matter of faith, even though it cannot be verified from other than muslim sources .

The TT stands corrected, and tips its hat in Vasarahammer’s direction.