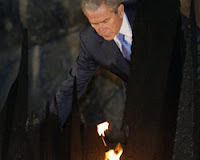 But there is another issue of equal importance here, that being, this very same president –who’s busy shedding tears over dead Jews– is insisting on reviving the dead horse “peace process” of Oslo. The Palestinians are no where near rejecting terrorist violence now, then they were on the White House lawn, where representatives of both Israel and the Palestinians had signed the Declaration of Principles for Peace, with the then US president, Bill Clinton, looking on.

David Hornik, freelance writer and translator living in Tel Aviv, and an acquaintance of the Tundra Tabloids has this to say about Bush’s regrets:

Here’s a way to make up for it: push for a mass expulsion of Jews from Judea and Samaria; push obsessively for a terror state abutting what little would be left of Israel and make it a centerpiece of your foreign policy; direct weapons, training, and funds to Israel-hating terrorists; uphold an oily, corrupt, spineless Israeli prime minister as a great leader whom his people must keep in office no matter what; ride and encourage the weakest, most capitulationist political factors in Israel whose policies always demonstrably lead to increased terror and increased empowerment of terror; elevate leaders of the already-existing corrupt, jihadist, genocidal substate entity already adjoining Israel to the status of honored international statesmen.

I couldn’t have said it better myself. *L* KGS