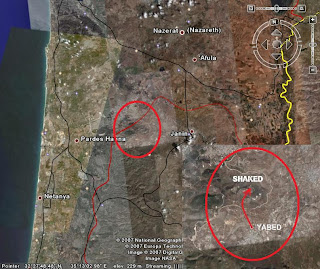 If the claim is true, this means that most of northern Israel can come under missle attack at any given moment. The Al Aqsa Martyrs’ Brigades claim to have launched a Kassam rocket from the Palestinian town of Yabed into Shaked, Israel. World Net Daily via Atlas reports the following:

As Israel prepares to withdraw from the West Bank, Palestinian terrorists claim they fired a rocket into the Jewish state from the West Bank city of Yabed, near Jenin. The Al Aqsa Martyrs’ Brigades terrorist group called WND to take credit for attacking the Israeli community of Shaked. Rocket firings from the West Bank are rare, with nearly all coming from Gaza, which Israel evacuated in the summer of 2006.

The terrorist source said the rocket was a Qassam, which has been renamed the Enunciation I. Qassams are improvised steel rockets, about four feet long, filled with explosives and fuel. They can travel between one and four miles depending on the sophistication of the particular rocket Al Aqsa claims the rocket landed in Shaked, but an Israel Defense Forces official told WND they were not aware of any rocket attack. However, the IDF in the past several months has denied claimed rockets attacks only to later release select information stating some missiles indeed had been fired from northern Samaria.”

While a Kassam rocket is less deadly than a suicide/homicide terrorist on a bus or in a crowed market place, Kassams are nonetheless a deadly weapon when they hit the intended civilian target. More here. *L* KGS

Update: Esther from Islam on Line reminds the TT that: “In the past few years there have been several cases where rockets have been fired from Northern Samaria towards Israel.”