Over at the blog of Jyllands-Posten’s cultural editor, Flemming Rose, the following line heads the post detailing the phenomenon of self censorship in Europe, where Islam is concerned that is. “God may not be great, but, obviously, some gods are greater than others.”

Flemming Rose makes a very valid point that, before and since the publication of the dreaded pictures of Islam’s prophet Mohamed, by the Jyllands-Posten, incidents of self censorship has been very noticeable. He then goes on to give ample proof of that censorship, while reminding us that the Dutch government has kept its silence over the rejection of Sooreh Hera’s artwork by the Hague museum, because it involves homosexuals with masks of Mohamed and his son Ali.
Rose ends his post with the following: “The only conclusion I can draw is that Allah is indeed very great in the Netherlands and that fear rules.”
I then proceeded to the comment section where an interesting exchange between the blog’s author and a commenter, prompted me to respond to the issue at hand. When it comes to the issue of either Islam or Muslims or both, very few understand (or are unwilling to understand) the actual issues, and what is at stake.
Those who refuse the positions of Flemming Rose and the Tundra Tabloids (and others) where Islam is concerned, usually resort to the default “knee jerk” reaction of either crying racist, or offering comparisons with other issues, that for logical reasons, are not comparable to the issue of Islam expecting the non-Islamic world to submit to its supremacy.
Take for example the commenter Z-Lo:

“There is debate everyday in the news about Islam, so why is it so necessary to find a way to provoke and offend – and call it ‘important’. There are edgy cartoons and whatnot dealing with race in the United States, for instance, but any cartoonist must be keenly aware of the line between “edgy” and “racist. Racist remarks periodically costs people their careers in the United States, but it is unthinkable that these would be supported by politicians and newspapers on a national or international level.”

Flemming Rose then offers a reasoned and well thought out response:
1. Freedom of religion is a fundamental right in a democracy, including the right to say no to religion, and in many Muslim countries apostasy is a crime punished by death.
2. You need to have the right to leave a religion, but you cannot leave your race, that is who you are, and that is the reason why there is fundamental difference between criticising people on the basis of their faith and race.
I weighed in with my own views, and after doing so, it occurred to me that a diagram might just help to digest the thought I was describing. So here it is with diagrams included.
I suppose if we were to limit the discussion to perhaps just values, and value systems –leaving the words Muslims and Islam out if it– people wouldn’t be so quick to cry “foul” or “hypocrite”. 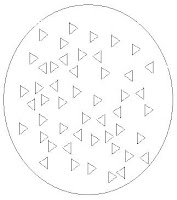 Let me explain. All societies are based on a set of values and value systems that have gone through series of societal debate and criticism. There is no value or value system (VS = organizational set of values) in the West that has not run the gauntlet of debate and critique.
Our society is a combination of these accepted values and value systems, as well as the absence of some unacceptable values and VS’s, with the latter being deemed as detrimental to the health of society. For example, we do not have societal approval of the KKK and racism, but recreational centers and sports clubs get great marks. 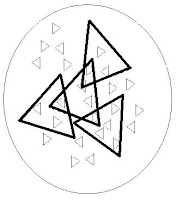 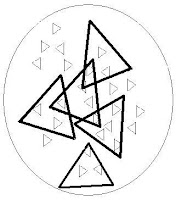 The problem begins when a value system demands that its own set of values –that are not shared by any other acceptable Value System– be exempt from the arena of debate and critique, that all other value systems -and their set of values are subjected to. (Left)
The picture that I described before now takes the shape of one huge triangle with the sphere inside it. (Right) 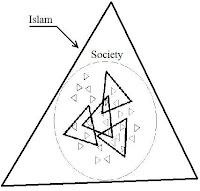 The moral of this story coincides with what Flemming Rose was explaining earlier:
” I don’t think that anyone should respect ideas, ideas and ideologies are to be challenged, criticised and ridiculed, that’s the essence of pluralism and a working democracy.”
That is exactly the point, and one need not invoke the name of Islam or Muslim in order to prove it. We are all bound by a mutual social contract that we use in order for us to “get along with the other” and to prevent others from hurting or taking advantage of the weak. (There are a host of other examples as well).
All of what we hold dear and important has gone through an important process of debate and critique, that is how we arrived at the modern state in which we live. No other value or value system is exempt from that process, National Socialism and Soviet Communism are the latest examples of Value Systems that sought to be over all other systems.
Any critique of these two would land the offender in a cell or worse, with the Communists even going so far as to convince the offender to declare his or her own guilt in causing …”offence”. Islam is behaving in the very same way, and we here in the West must be diligent in making sure we do not allow for Islam to achieve a position of dominance and be above critique. *L* KGS
Note: For more examples of censorship, look at some Finnish examples, here, here and here.