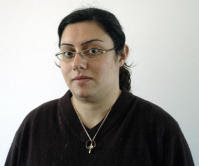 I must give credit to the Keskisuomalainen! The KS published this article today, by an acquaintance of mine, Semy Kahan, concerning the plight of Christian Arabs living within the Hamas run enclave called Gazastan. Here it is in full.

Gaza’s Christians Are in Mortal Danger

“Christians have been threatened and even murdered during the last few months. Hama’s overthrow of the Gaza strip last summer was a catastrophe to the area’s approximately sized, 3000 p. Christian minority. Christians have become under continual pressure and targeted in the new Hamas state. Christian Gazan, Rana Ajad, was murdered on October 7th.

This week I met his widow, Paulina Ajad (pictured) ,and her sister Rani, and her husband William Kader at their temporary apartment in Beit Sahur, near Bethlehem. They left Gaza together along with seven other families a few weeks after the murder. The markings of grief were evident in Paulina’s black dress, as well as in her pretty but distraught face. She told of her experiences in a softended and restrained voice.

Paulina, her husband and their other Christian acquaintances know the atmosphere of hatred since Hamas took power in Gaza. Extremist Muslims began watching them and let it be known that theat they were unwelcome residents there, because they were Christians. They were suggested to convert to Islam, and a few were even offered money to do so.

Others were threatened in different ways. Paulina told of a Christian female doctor, who was threatened with rape if she didn’t change her religion. In the end, the woman wasn’t able to bear any longer the threats and converted to Islam. Many youths who have to marry Muslims are forced into conversion afterwards.

Paulina’s husband Rana, was an accountant by trade and worked in the Palestinian Bible Society in Gaza. One day a Muslim sheik came to him and tried to talk him into converting to Islam. Rana replied, that because the sheik wouldn’t convert to Christianity, he had no intention of abandoning his own religion. The promised to return to the matter and weeks later Rana was brutally murdered.

The sister of the murdered man, Rani, told of the same kind of experiences, and how they lived in growing fear for their own safety. She told of the portions of Christians moving abroad. Rani’s brother Ibrahim, want’s to move to Sweden, but was rejected on the basis that, Gazan officials have assured the Swedes that Christians are not being persecuted in Gaza.

Paulina has two children and she is expecting a third. She plans to name the girl being born, Sama, which means in Arabic, Heaven. In that way she want to honor the memory of her murdered husband. She deems her husband a martyr who has gone to heaven as a reward for his bravery in refusing to shun his faith.

Paulina has a BA degree in computer programming. She greatly values the Bethlehem Bible Society and the economic and moral support its volunteer staff have given during her time of grief.

I have written about this situation repeatedly at the Tundra Tabloids, even taking the issue up (of Christian persecution by Palestinian Muslims) with the Archbishop of the Lutheran Church, Jukka Parma. I have also highlited the need for Western Church officials to view with great scepticism the flowery reports coming from their co-religionists in areas of great persecution.

Kudos to both Semy Kahan for writing this important article, as well as the Keskisuomalainen for publishing it. *L* KGS