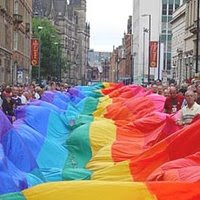 It’s a well known fact that Yasser Arafat was a “light in the saddle” terrorist, being caught on audio tape in his bedroom romps with his security personnel by the Romanian secret police.

It’s also widely known that the religious supremacist Taliban have stables of young boys at their beck and call, while at the same time imposing their draconian version of morality –through the sharia– in areas under their control.

Now we see both the Hamas and Fattah trading “blows” in public, over which terrorist group is more gay than the other. The J’lem Post’s own KHALED ABU TOAMEH reports just how far the “mud slinging and bottom grabbing” has gone between these two groups:

“Shortly after the Islamist movement wrested control of the Strip, Hamas officials began talking about “embarrassing” and “damning” documents and films that were seized inside Palestinian Authority security headquarters formerly controlled by Fatah. According to the officials, the Fatah men had been spying on several senior PA officials, some of whom were caught on tape having homosexual intercourse. “

But wait, it doesn’t end here, Fattah has equally as damning reports on Hamas as well:

“According to Fatah, a Hamas imam was recently caught having sex with a male minor in a mosque basement. In another incident, according to Fatah, a senior member of Hamas’s armed wing, Izaddin Kassam, was expelled from his refugee camp after he was caught having sex with a male colleague in a vehicle. And according to a report on a Fatah-controlled Web site, a Hamas man was caught naked together with his neighbor’s wife in her bedroom.”

The best quote from the entire article is here (about Fattah):

“Some of them had individual sex, while others preferred group sex. Some of them paid money for sex, while others performed sexual intercourse with males in front of their wives.” The sex allegedly took place in hotels, clinics and private homes – in some cases with a picture of Yasser Arafat hanging overhead.”