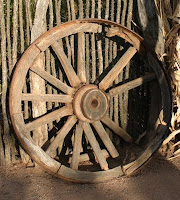 “The new “axis of evil” may have lost one of its spokes.” It looks like the case against Syria was stronger than I first expected. Via Atlas Shrugs is a report by the Times Online, which describes the Israeli air attack on a Syrian position some fifty miles from the Iraqi border.

The attack was against a Syrian facility that was believed by Israel to be extracting uranium from phosphates. The N.Koreans caught Israel’s attention last August, with their signed agreement with Syria for “cooperation in trade and science and technology. The N.Koreans are believed to be also developing the long range capabilities of Syria’s Scud-C missiles.

Still, there is much speculation as to whether the N.Koreans would be willing to cross a “red line” with Washington by proliferating nuclear related materials to Syria. If the N.Koreans are not actually transporting such materials, why were they there at the facility that was targeted by Israel?

If such materials exist/ed and did not originate from N.Korea, where did the Syrians obtain it from? Perhaps from Iraq? Interesting to note that the Iranians sent some of their own to Syria to assess the damage, and I believe that it’s not unreasonable to believe that both Iran and Syria with the help of the N.Koreans, are busy making use of whatever material obtained from Iraq before Operation Iraqi Freedom began.

There are still a lot of unanswered questions, and it’ll be interesting to see what information, if any, floats to the surface. That the Syrians themselves are keeping mum over the whole incident, speaks volumes, and helps to validate much of the speculation that it was indeed a nuclear facility. More here. *L* KGS

Note: Where is the IAEA in all of this? The IAEA became aware of AQ Khan’s proliferation of nuclear technology after the fact, and only because he himself broke silence about his activities. And as a reward for the entire fiasco, the head of the IAEA, Mohamed Baradei, is given the Nobel peace prize. Now how nice is that?