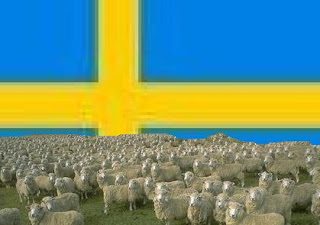 The Islamists have spoken, they want the offending Swedish cartoonist, Lars Vilks who drew the dreaded “roundabout doggies” (Mo-Hounds)…dead, as well the editor who published them.

“The leader of al-Qaida in Iraq offered money for the murder of a Swedish cartoonist and his editor who recently produced images deemed insulting to Islam, according to a statement carried by Islamist Web sites Saturday.

“We are calling for the assassination of cartoonist Lars Vilks who dared insult our Prophet, peace be upon him, and we announce a reward during this generous month of Ramadan of $100,000 for the one who kills this criminal,” the transcript on the Web site said.

The al-Qaida leader upped the reward for Vilks’ death to $150,000 if he was “slaughtered like a lamb” and offered $50,000 for the killing of the editor of Nerikes Allehanda, the Swedish paper that printed Vilks’ cartoon of the Prophet Muhammad with a dog’s body on Aug. 19.”

The Local has more on it here as well. It appears that the jihadi threats being made to Swedish businesses, are also being taking seriously. The Swedish telecom giant Ericsson is reducing its visibility in Iraq, taking down all its flags and warning its employees in the Middle East to take necessary precautions for their personal safety.

Charles Johnson at the LGF blog mentions that Lars Vilks, being the “typical anti-everything leftist, has received a wake up call from the RoP.” He includes a quote from Vilks who states:

“Vilks said from Sweden he believed the matter of his cartoons had been blown out of proportion. We have a real problem here,” Vilks told The Associated Press by telephone. “We can only hope that Muslims in Europe and in the Western world choose to distance themselves from this and support the idea of freedom of expression.”

I agree with Johnson that,…Lars Vilks shouldn’t hold his breath.

Only when the Left begins to “get on board” with the fight against Islamist extremism, will there be any serious progress. Right now, the Left is more worried about disrupting the good measures employed by the west –than engaging in meaningful debate that might be of use– in stopping the spread of Islamism and Islamist extremism. Taking the Islamists at their word seems to be an anathema for the Left, who still like to insist that the reasons behind Islamist “Muslim rage”, has more to do with social issues than to make us …all Muslim …or …all dead.

Perhaps the “singling out” of one of their own for slaughter, might be a turning point for the Left, at least in Sweden. It’s interesting to note the Swedish media’s rallying behind the well respected leftist, Lars Vilks. It’s also interesting to see that there hasn’t been any call to silence his blog, which still includes all of his released Mo-Hound drawings.

In comparison, the right-wing Swedish Democrats’ website was the focus of anger from the Swedish Left, for its re-publishing of the “dreaded Mohamed cartoons” first seen in the Jylands-Posten. Former Swedish FM, Laila Freivolds tried to get SD’s server to pull the site and when her scandelous behavior became public knowledge, she ended up being given the boot, for the role she played and for lying about it.

We shall see as to whether or not this incident serves to galvanize the Swedish Left to become a part of the war on Islamism and its extremist side, or behave like sheep before their own slaughter. I hope its the former. *L* KGS