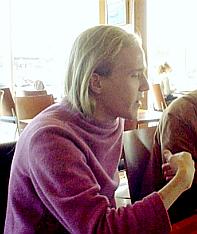 As I reported yesterday, the Gates of Vienna posted a very detailed (as much as possible) story on Finnish blogger Mikko Ellilä, who is currently under police investigation for supposedly violating the Finnish statute Chapter 11, section 8 of the Finnish penal code (via Vasarahammer):

“Whoever publicly distributes statements or other information that threatens or abuses some national, racial, ethnic or religious group or group of people that can be regarded as such, shall be sentenced for incitement against a group of people to pay a fine or imprisoned with maximum penalty of two years.”

I just spoke with Ellilä this morning and he seems to be taking everything in stride. There is nothing to the charges leveled at him. This man is not against Muslims, but against the fundamentalist teachings of Islam that preach intolerance and supremacy over other non-Muslims.

The Islamic religion in its purest (political) form is totalitarian in nature and therefore anti-democratic. We spoke about the meaning of the word “moderate” in relation to Islam as something no longer holding any meaning, since many so called “moderates” have been praised in the west, to only later being found to have been supporting jihad against non-Muslims from the very beginning.

The Muslims we look to with hope are the “modernists”, who truly believe in liberal democracy and that Islam should be a matter of personal faith, not politics. Those who refuse to condemn sharia (Islamic law) as being incompatible with modern day society, are the Muslims we take issue with. It is these Muslims who present a clear and present danger to the rest of society, and I believe that are the focus of Elliläs blogging.

The Finnish police investigation has not even informed Ellilä who is behind the allegations nor has he been made aware of what posts are the focus in the investigation. This is a golden opportunity not only for the voices of free speech, but also for those of us who have been warning about the dangers Islamists pose to a free society. The non-violent Islamists and their agenda are as every bit as dangerous as the Islamist extremists who promote and carry out jihad against non-Muslims and “modernist” Muslims.

The situation is not as dark as some might believe, Mikko Ellilä is a brave man and deserves solid support from the anti-jihad/Islamist blogosphere. He truly has found a friend in the Tundra Tabloids. *L* KGS

This is PRODOS, the owner of the THINKER TO THINKER blog service which hosts Mikko’s blog, and which offers free blogs to anyone who supports freedom, creative thinking, and capitalist ideals.Thank you for supporting Mikko EllilÃ¤!

There will be NO apologies nor any joining of ranks with European Dhimmitude.

WE WILL NOT SUBMIT! PRODOS

Update: Mikko Ellilä just left me the following statement in the comment section:

“I called the policeman who is in charge of the “investigation” and he said “minority ombudsman” Mikko Puumalainen had told him to investigate my blog for alleged “hate speech”. Then I called Puumalainen himself, who refused to specify his allegations. I said I expect him to e-mail me all the material that he sent to the police when he told them to start this witchhunt.

I will visit the police station for the interrogation on Monday. If I have not received the relevant material from Puumalainen by then, I can sue him for making false allegations and for refusing to disclose public information. You can call him at +358-50-3960140.

I believe Puumalainen is seriously breaking the law here. The law concerning “hate speech” was meant to be used against people who say things like “kill all Jews” (which is what the Muslims are saying all the time) and not against people like me who are merely quoting newspaper articles in their blogs and saying things like “the so-called Parisian teenagers rioting at Gare du Nord were actually African immigrants, many of them over 30, but mainstream media uses the word ‘youths’ as a eufemism for Muslims”.”

Like I said, there is no gas to the allegation of incitement here, this is just a gimmick by [an as-of-yet unnamed party] minority ombudsman Mr.Puumalainen that wants to intimidate Ellilä into silence over his criticisms of Islam. The police are duty bound to follow up on the complaint no matter how stupid or ludicrous it may be. [I am curious though, to know who the person/s leveling the charge of inciteful “hate speech” against this blogger?] *L* KGS

Correction: I misunderstood about the person behind the allegations leveled at M.Ellilä, “minority ombudsman” Mikko Puumalainen is behind the charges. Mikko Ellilä also says that the same individual had an op-ed published in the Finnish newspaper Aamulehti, in which he said:

“In this article Puumalainen speaks for tough measures againts internet racism. The authorities should develop new methods for combating internet racism and they should use measures used against child pornography as an example.But the most unbelievable point is the one he makes in the second paragraph: “The goverment should especially take action against those who use publicity to maintain anti-immigration attitudes.”

So at least there is a name an office behind the bogus charges, my apology to Mikko for not looking more closely at the comment section. *L* KGS