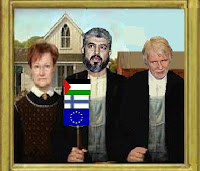 Finland, Italy, France and Spain are seeking to bypass the three conditions set by the Quartet, and restart European contacts with the Hamas government. As I reported earlier, Europe is chomping at the bit to recognize the Hamas led government.

I suspect that the Finnish government which is represented by its Foreign Minister, Erkki Tuomioja, is one of the driving forces behind this attempted “end run” around official EU policy vis-a-vis the Palestinians.

I’m certain that Finnish FM, Erkki Tuomioja, — who is certainly no friend of Israel — is in full agreement with his former lover, Finnish President, Tarja Halonen (pictured standing left), to help scuttle the conditions laid out in the Road Map, by forcing an Arab-European wedge into the understandings between Israel and the Quartet.

Israeli Foreign Minister, Tzipi Livni poured water on the idea straight away, by highlighting the fact that Israel will cease contact with any “Palestinian moderate” if any such move by Europe is seriously contemplated.

Tzipi Livni: “Israel’s ability to engage and make progress with moderates on the Palestinian side is closely tied to the international community’s continued refusal to legitimize any PA government that fails to fully comply with the Quartet principles.”

Just how much longer can Finland be seen as a neutral player to the Middle East conflict? Its current FM clearly takes an Arabist point of view, and proves it by his selective use of language in describing the conflict. He would of course deny taking any sides, but the record is there for all to see. Read more about it here. *L* KGS