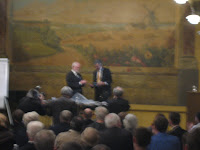 It was a fitting venue last Saturday (10-3.07) for members of the Danish The Free Press Society to have gathered in Copenhagen’s historical Workers’ Museum, to hear their invited guest speaker, Dr.Daniel Pipes, deliver a speech on the dangers that radical Islam holds for civilized western society.

The event began with the Danish Free Press Society’s 2007 Trykkefrihedsprisen (the Free Press Award) being given to Dr.Pipes by Lars Hedegaard, in acknowledgement of his fight for freedom of speech, his opposition to Islamism, his work for academic freedom in American universities, and his support for Muslim dissidents who speak out against Mecca.” Gates of Vienna has the translation of the Danish FPS’s press release here, thanks to the blogger Kepiblanc.

Addressing a sizable crowd that filled the hall located on the second floor of the museum, Dr.Pipes began his speech by looking back to the Salman Rushdie affair, in which Ayatollah Khomeini issued a fatwa against Salman Rushdie for writing his book (the Satanic Verses) that supposedly insulted Islam. The Ayatollah’s Fatwa not only affected Salman Rushdie, but also those in the West who helped publish and market his book, as well as those Muslims who defended him, making this the first attempt by an Islamic leader to interfere inside the West with an Islamist edict or “fatwa”. 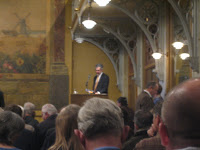 He also spoke of the need to stand firm against the radical Islamist’s agenda here in the West, giving a perfect example of such an agenda in Britain, with Muslim Council of Britain’s appeal for a ban on un-Islamic schools in Britain. Dr.Pipes then read the list of the MCB’s demands:

— All schools should bring in effective bans for all pupils on “un-Islamic activities” like dance classes.– It also wants to limit certain activities during Ramadan. They include science lessons dealing with sex, parents’ evenings, exams and immunisation programmes.

— The holy month – when eating and drinking is not allowed in daylight hours – should also see a ban on swimming lessons in case pupils swallow water in the pool.

— When swimming is allowed, boys should wear clothing covering their bodies “from the navel to the neck”, even during single-sex pool sessions, while girls must be covered up completely at all times, apart from the face and hands.

— The MCB adds that schools should ensure contact sports, including football and basketball, “are always in single-gender groups”.

— School trips to be made single-sex “to encourage greater participation from Muslim pupils”.

— Arabic language classes for Muslim pupils, and says the Koran should be recited in music classes. And all schools should ensure they have prayer rooms with washing facilities attached, it says.

— Art classes, Muslim children should not be allowed to draw people, as this is forbidden under some interpretations of Islamic law.

— Insists that all British children should learn about Islam, it wants Muslims to have the right to withdraw their children from RE lessons dealing with Christianity and other faiths. Special treatment and opt-outs are necessary because otherwise Muslim pupils will feel excluded from school activities and lessons.

The reading of the list was greeted with a mixture “uncomfortable laughter” and “bewilderment”, with many in the audience shaking their heads in disgust as Pipes read the Islamists’ demands one by one.

Dr. Pipes then mentioned that the West to some degree, was responsible for the measure of success the Islamists have enjoyed thus far. For an example, Pipes mentioned that:

“during times of crisis, western government officials have unwisely sought out (relied upon) the more radical members from the Muslim community to help calm a situation, thereby giving them credibility at the expense of the more moderate/modernist Muslims.There needs to be a better awareness of “who stands for what” inside Muslim communities, and avoid giving the Islamists any recognition as spokesmen for Muslim communities.”

After Pipes concluded his speech, there was an hour reserved for Q & A, one individual asked whether Pipes could explain his meaning by “radical Islam and Islamists”. Pipes replied that “it is the political application of Islam into the daily lives of its adherents, having three main features: a devotion to the sacred law, a rejection of Western influences, and the transformation of faith into ideology.” He has written more exclusively about it here.

One point often repeated by the different people I talked with, was that the majority of Danish Muslims were upset with the radical Imams that peddled their wares throughout the ME. The most vocal supporters of Abu Laban and “ilk”, as well as the “outrage” over the printing of the cartoons of Mohamed, came from a minority within the Danish Muslim community.

As I heard it, the Imams that inflamed the crisis were competing with each other in a power struggle for control over the DMC. Anyone that I happened to bump into made it a point to mention that they have absolutely no problem with modernist/moderate Muslims living in Denmark, they were just against the radical extremists and their Islamist agenda.

It was interesting to listen to Daniel Pipes give a speech concerning another totalitarian ideology in a building that is dedicated to the socialist movement in Denmark. Both movements ironically find in each other a soul mate, as Paul Berman writes in his book, Terror and Liberalism, “through the nihilistic side of their utopian ideologies”. 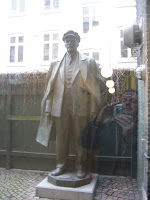 I am sure that Lenin would agree.

(picture taken from inside the museum, the statue of Lenin came from the former state of Czechoslovakia)

The Gates of Vienna kindly mentions my being in Copenhagen at the Daniel Pipes’ speaking event here.

Update: By way of Gates of Vienna, here is an half hour video of the event, courtesy of Steen at Snaphanen