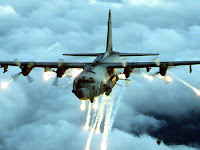 No, I am not referring to a drunken stint though the terrorists did get a taste of something, but it was far more powerful than any alcoholic beverage (something they shun unless trying to fool the Kuffar/Infidel). I am referring to the drubbing they received by one of the most lethal flying machines ever built, the AC-130 gunship. Read more here. *L* KGS

Update: Al-Reuters is spinning the US military strike on Al-Qaida as an intentional hit on a Somalia village.

“By Guled Mohamed MOGADISHU (Reuters) – Many people died when a U.S. gunship hunting al Qaeda suspects attacked a village in southern Somalia as part of a wide air offensive against fugitive Islamists, officials said on Tuesday. In Washington’s first overt military intervention in Somalia since a disastrous peacekeeping mission that ended in 1994, an AC-130 plane rained gunfire on the remote village of Hayo late on Monday, a senior government official said.” More here.

“CBS/AP) A U.S. airstrike hit targets in southern Somalia where Islamic militants were believed to be sheltering suspects in the 1998 bombings of two U.S. embassies, Somali officials and witnesses said Tuesday. Many people were reported killed.” More here.

“The United States launched a strike Monday against suspected Al Qaeda members in Somalia, a senior U.S. official informed FOX News. The attack by the Air Force AC-130 gunship, capable of firing thousands of rounds per second, left casualties on the ground, but it is not clear if any of the dead were targeted terrorists, the official said.” More here.

ABC covers it this way:

“U.S. helicopter gunships launched new attacks Tuesday against suspected al-Qaida members, a Somali official said, a day after American forces launched airstrikes in the first offensive in the African country since 18 U.S. troops were killed there in 1993. The latest attacks killed at least 27 civilians in the town of Afmadow in southern Somalia, lawmaker Abdiqadir Daqane told The Associated Press.” More here.

Clearly the Reuters’ story angle was to characterize the US military as hapahazardly targeting a Somali village where the result was dozens of civilians being gunned down. A pretty hyperbolic way to start off a news story, when the exact details of what actually happened are still very unclear.
A better way to phrase it would have been: “going after Al-Qaida targets within a Somali village, a US military strike leaves X number of Somalis dead.” Anyways, how many of those claimed dead were indeed civilians? *L* KGS