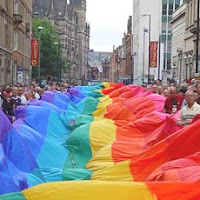 25 year old Palestinian Rami, fled to Tel Aviv when he was a teenager.

“I am afraid, really afraid. One of the last times I was deported, the Israelis left me on a deserted road. I saw a lot of people from my village and they started asking me what I was doing there. I don’t speak very good Arabic anymore, so they started saying that I was a collaborator. I was afraid they would kill me . I fear my brother and Hamas more than the Israeli police, because if the Israelis catch me, they won’t kill me. They will just arrest me. But Hamas will surely kill me.”

This is just another one of those sad stories that highlights the differences between societies in the Middle East. One of the least mentioned issues due to its being such a taboo subject, is homosexuality. Due to Israel being a liberal pluralistic democracy, the political system safe guards the rights of its minorities, whether they be Jew, Arab or Christian and Ba’hai, straight or gay. Not that there aren’t any short comings, but there is the rule of law, and an effective court system that is able to handle any case brought before it. Sadly to say, one of the more persecuted minorities, besides the Christian minority within the administered Palestinian Authority, is the plight of Arab gays.

The BBC will be running a radio program which: “explores Muslim attitudes to homosexuality through the lives of some of the gays and lesbians forced to flee to Israel.”

Israel is the natural destination for Arab homosexuals fleeing the intimidation and persecution of a bigoted and “very lethal” Muslim society, as the story of the Palestinian “Rami”, accurately depicts. But what is also not so well known, is that homosexuality actually is very prevalent within Muslim society, though the majority of practioners would not consider themselves to be homosexual at all.

According to an article in the FPM, the Taliban issued a new set of 30 rules to its fighters, but one of the rules mentioned brings light to a very troubling dilemma Muslims face. The issue of practicing homosexuality within a strict religious environment, while maintaining the canard that one is not a practicing homosexual, and not in direct violation of the religious laws that their societies violently uphold, must be a very perplexing dilemma for the jihadis. But then again maybe not.

Rule No. 19 instructs the Taliban fighters that they must not take young boys without facial hair into their private quarters. Jamie Glazov correctly adds:

“Rule No. 19 obviously indicates that the sexual abuse of young boys is a prevalent and institutionalized phenomenon among the Taliban and that, for one reason or another, its widespread practice has become a problem.

The fact that Taliban militants’ spare time involves sodomizing young boys should by no means be any kind of surprise or eyebrow raiser. That a mass pathology such as this occurs in a culture which demonizes the female and her sexuality — and puts her out of mind and sight — is only to be expected. To be sure, it is a simple given that the religious male fanatic who flies into a violent rage even at the thought of an exposed woman’s ankle will also be, in some other dysfunctional and dark secret compartment of his fractured life, the person who leads some poor helpless young boy into his private chambers.”

The issue here, is using homosexuality as an institutionalized “vent” for self imposed restrictions in their interactions with members of the opposite sex. Yes, the same phenomenon can be found within some parishes of the Roman Catholic Church, but with a relatively few number of priests committing the same offences. But as far as I know, neither the Roman Catholic Church nor Western society in general has ever voiced approval over the despicable practice.